KDean75 was in a tough spot with this pick because the Bears traded away their first round pick so he chose to make this pick as if the first round pick never happened. With that in mind, improving the pass rush was still a major need.

Since the Bears traded their first round pick for Jay Cutler, they're still in need 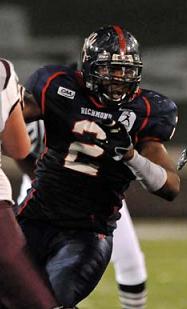 of wide receivers and defensive ends. Again, the value for a WR is not good here, although Joaquin Iglesias is extremely interesting here as a nice complement to Devin Hester.

The Bears still have their substandard pass rush, the Bears go for the best defensive end on the board, Lawrence Sidbury, from Richmond. Here's what we said in our potential draft pick series:

Positives: Sidbury's a natural athlete with good timed speed and above average quickness and agility in tight places. He became a true force off the edge at Richmond and is strong enough to be an effective bull rusher while also having the quickness to employ a very effective spin move. He's also stout against the run and his long arms and big hands help him fight off blocks from larger offensive tackles. He's greatly improved over the past couple of seasons and his non-stop motor has helped him became a team leader as a senior.

Negatives: Sidbury isn't as tall as some prefer, although other scouts actually argue that it helps him get under the pads of offensive lineman, but he will have to continue to work to improve his strength at the point of attack. He doesn't play up to him timed speed and he isn't really a punishing tackler considering his size. His repertoire of pass rush moves isn't complete and he'll have to learn how to play with his hand off the ground. A lack of experience in coverage and the level of competition is also a concern.

Many thanks to KDean75 for submitting this pick. The Browns and Cardinal_Fang are now on the clock with the Cowboys and hevchv on deck. If anyone needs to refresh their memory on the second round draft order, check here.

Also guys, we're in draft 'crunch time' right now with nearly twenty picks to cover in the next five days so we're going to be hitting these fast and furious. If you can, send a list of three players who you'd like to draft as your pick approaches so that we can stay ahead of the action and knock these picks out quickly.