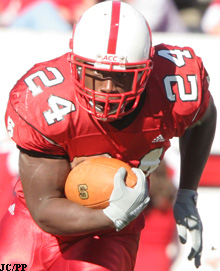 Brown has a stout body, with good vision and the ability to break tackles thanks to his leg drive and speed. He is more of a straight-line, north-south runner, as he lacks the loose hips to bounce wide or redirect in an instant. If you are looking for a very explosive north-south runner, Brown is the perfect fit. He moves on the ball's snap with no hesitation and it is rare to see him false step. He's limited as a cut-back runner, but gets into trouble when he tries to bounce and feel for the cut back. He has the explosion to beat defenders taking the ball between tackles, thanks to his short burst, but struggles when having to cut back or bounce to the outside. Brown is just starting to develop as a receiver, showing good hands to secure the ball outside his frame. 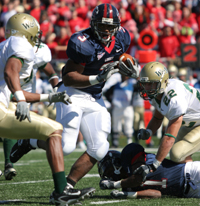 Rashard Jennings is an explosive running back who can run, catch and block. Jennings has good initial quickness, but is inconsistent changing direction due to hip stiffness and failure to keep his running stride down to squeeze through tight spaces. Jennings has a deceptive burst that allows him to surprise a lethargic defender with his straight-line charge, but he is more of a power back, one-cut runner than an elusive one. He has the thick legs to drive through the initial tackle and a strong stiff arm to fend off the smaller defenders. It is very rare to see him get turned back taking the ball up the middle, but he is really just a power-oriented one-cut runner that lacks nifty moves, but plays with good body lean. He catches the ball cleanly and does a good job extending for the off-target throws.

Powerful build. Runs with a low pad level, giving defenders little room to hit him. Has a low-center of gravity and a good first step to accelerate. Hits the hole with authority. Some lateral quickness to elude in tight quarters and can make defenders miss in the open field. Good vision for the cutback. Finishes his runs by falling forward. Secure ball-handler with only one fumble in 310 touches in 2008. Lacks the speed to beat linebackers to the edge or the top-end speed to pull away when gets to the second level. Lacks the agility to make defenders miss if met in the hole. Relies on his initial pop and aggression, rather than true power, in taking on defenders. 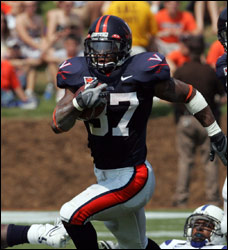 Peerman has outstanding timed speed, but it does not always translate to the field, as he has a bit of a hitch coming out of his stance, preventing him from generating good explosion into the holes. He is a small, but well-built athlete who is a shifty runner with good hands as a receiver. He has good quickness and balance, but lacks the suddenness or change of direction skills to bounce the ball wide for big runs (only four runs for more than 20 yards as a senior). However, his frame is also built for power, and he does fairly well moving the ball inside. He is not a player that will run over the larger defenders, but he is tough and feisty taking the ball up the gut to get good yardage after initial contact. He is blessed with that rare speed runners can only hope for, but fails to generate the second gear to escape when bouncing wide. 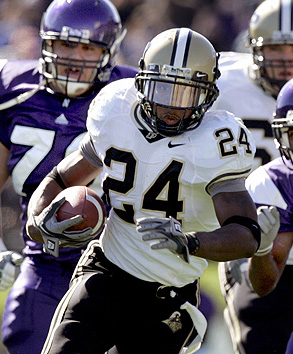 Sheets is a lanky, slinky runner who is quick to the hole, patient and agile through traffic; he also has an extra gear to outrun a lot of defenders. He is not an effective blocker and lacks leg strength to pound into the line for tough yards. Sheets is not what you would consider a power runner, but he uses his leg drive effectively, flashing lateral quickness and consistency seeing the cutback. When he stays low in his pads, he will get the tough yardage with his balance. However, when the rush lane is clogged, he gets too erect in his stance and seems to expose the ball too much when trying to redirect off-tackle, especially when going to the right hash and this resulted in a high amount of costly fumbles...Sheets is the type that can stick his foot in the ground and explode through the hole, but is not capable of pushing the pile. Sheets is a capable receiver out of the backfield, but won't run any deep patterns or do anything fancy with the ball in his hands. 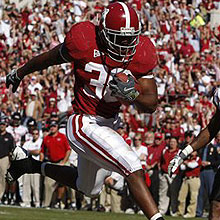 Coffee is more quick than he is fast, but shows good explosion and burst coming out of his stance. He attacks the holes with good pad level and forward body lean. He is better as an inside runner, as he does not show that ease-of-movement agility to change direction and locate the cutback lanes without having to throttle down. He runs with adequate strength and will need to improve his lower-body power in order to break tackles consistently at the next level. He is not really a shifty runner with the ability to juke defenders, but can accelerate past second-level defenders. Coffee's lack of lower-body strength is evident, but he does a nice job of squaring his shoulders and lowering his pads. He has an above-average stiff arm that he uses quite a bit to break tackles. He has developing hands and the ability to turn and catch off-target throws, but his route running, or lack of, has prevented him from being a part of the intermediate-to-deep passing game. Coffee is not effective as a lead blocker and must be alert to the blitz and stunts when asked to provide pass protection. 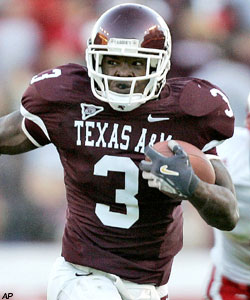 He is quick and explosive with his long speed, but has just marginal strength, making him a liability as an inside runner. He has good change of direction agility and shows very good quickness out of his stance, along with the sudden burst to elude defenders turning the corner. Goodson has that sudden burst to escape the crowd and does a very good job of accelerating away from the second-level opponents... Goodson runs with good balance, but lacks the leg drive and upper body strength to push the pile. He will go down vs. initial contact and is prone to coughing up the ball when tackled hard...Goodson left school early and the coaching staff seemed relieved by his decision. He has had problems with both of his head coaches and is perceived as a player that is not willing to conform, raising some red flags that will affect his overall draft stock.