About the month ago it looked like the Arizona Cardinals were solid at inside linebacker with Karlos Dansby and Gerald Hayes as the starters and Victor Hobson and Ali Highsmith providing depth. At that time the biggest need on the inside might have been another developmental player for depth but nothing about the inside linebackers suggested that the position was a pressing need. That warm, fuzzy feeling quickly faded though when Dansby fired his agent and spoke publically about looking forward to making a splash in free agency next off season. While it's still possible for Dansby to agree to a long term extension, it certainly won't happen before this weekend and with that in mind the Cardinals must enter the 2009 draft with the possibility of needing a starter at ILB in 2010.

The Cardinals don't have to push inside linebacker to the top of their needs list but it has become a position that we can not afford to neglect. Since we've over looked the entire position until now in ROTB's draft preparation, here's a look at the crop of talent that should be avaliable in the middle to late rounds.

Darry Beckwith (6'0 234): Beckwith has been a productive linebacker during his time at LSU where he was a three year starter and two time 2nd team All-SEC linebacker. He's got experience inside and outside but most scouts project him on the inside at the pro level. He didn't disappointed some with 4.79 forty and 26.5 vertical jump but he improved on his forty (4.65) at LSU's pro day to ease some concerns about his athleticism. He's not a great athlete and injuries are big concern but when healthy, he's one of the better linebackers in the country. Questions abound about Beckwith's potential in the NFL but he sounds like a solid football player who didn't wow scouts in the 'pre-draft' workouts. Projected Round: Late 2nd to late 3rd

Pros - Beckwith has a good sized frame that could still be bulked up without a loss of quickness or agility. He's a decent athlete who makes plays from sideline to sideline and makes plays in pursuit. He's at his best when playing down hill against the run where he's aggressive and physical. He's a reliable tackler who's capable of getting off blockers, sifting through traffic and making plays. He flashes some explosiveness as a hitter and knows his limitations and roles within a defense.

Cons - Injuries are the biggest concern with Beckwith as he's missed time in each of the past three seasons with knee and shoulder injuries. He's also shorter than your typical linebacker and isn't overly strong or fast. Beckwith isn't a great pass rusher either and he's not totally comfortable in coverage.

Jasper Brinkley (6'1, 249): Brinkely burst on the scene in 2006 when he transferred to South Carolina from Georgia Military College and totaled 107 tackles, 14.5 tackles for loss and five sacks. 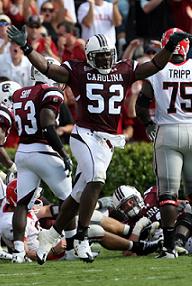 His 2007 season ended just four games in after a knee injury and his 2008 season he simply didn't look like the same player. Some scouts suggest that he played overweight while some speculate that he simply wasn't 100%. Two years removed from the surgery though Brinkley has been rising up the charts with some impressive workouts. His 4.72 forty at the combine was among the best at his position and his 35.5 inch vertical helped prove that the explosiveness is back in his game. If Brinkley can recapture the form that he displayed in 2006, he could be a steal in the middle of the draft provided that he stays healthy. Projected Round: 3rd

Pros - With prototypical size and strength for the position, Brinkley brings a unique combination of size and athleticism to the table. He's a reliable tackler who is capable a delivering a monster blow. He's got solid short area quickness and has the ability to work through trash and find the ball carrier. He's very solid against the run and a good pass rusher with a solid burst to get to the quarterback.

Cons - Brinkley's abilities as a run defender and pass rusher do not extend to coverage where he looks stiff and uncomfortable in space. He doesn't play as physical as his size and strength would suggest and he needs to rely on his size advantage instead of trying to slip blocks. His instincts and awareness are still in the developmental stages and he can be fooled by misdirection or play action.

Gerald McRath (6'2 230): Few linebackers have put up the numbers of McRath over the past two seasons (276 tackles), but his lack of size projects his as a 4-3 outside linebacker. He's good athlete but looks like a strong safety instead of linebacker and his play is too soft for a 3-4 inside backer. Projected Round: 3rd to 4th 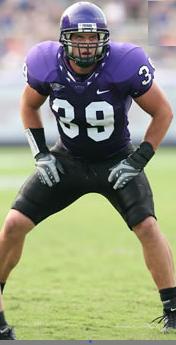 Jason Phillips (6'1, 239): Phillips isn't a 'wow' player but he gets the job done and is the only player in Mountain West Conference history to earn first or second team honors in all four seasons that he played. He surprised scouts when broke off a 4.69 forty at the combine but he also tore a meniscus in his left knee while at the combine. He's still on crutches but claims that he'll be ready for the start of training camp. Regardless of how quickly he's able to return to full strength Phillips should have a solid career based on his work ethic and dedication to the game. Projected Round: 4th

Pros - He's got a solid frame that's perfectly suited for an inside backer in the 3-4. He plays to contact and is able to shed blocks quickly and work through trash to find the ball. He combines great instincts, a solid football IQ and a non stop motor to make plays that other backers wouldn't and he's got the power to deliver big hits. He's at his best when playing downhill against the run but he can also hold his own on coverage. He's got decent ball skills and is able to read the eyes of opposing QB.

Cons - Phillips doesn't have great height and he's certainly not the best athlete. His lack of lateral quickness prevents him from making plays sideline to sideline and he doesn't have the athletic ability to overcome his own mistakes when he over pursues or is fooled. He can be an decent blitzer but his repertoire is limited to a powerful bull rush and when he gets too aggressive he'll whiff. Basically his lack of athleticism narrows his margin for error on the field.

Dannell Ellerbe (6'1 236): Ellerbe is a perplexing prospect because he's had one great season (2007) and three highly mediocre seasons. His breakout year in 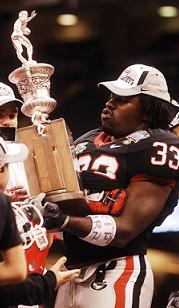 2007 saw him move to the inside backer spot and flourish to the tune of 93 tackles, 12 for loss and 4.5 sacks. In his other three seasons combined he's managed just 55 tackles, nine for less and four sacks. His senior season in 2008 was hampered by a knee injury that completely knocked him out of three games and limited him in several others. He's played all three linebacker spots but his best play has come when on the inside. He also didn't do a full workout at the combine because of a torn chest muscle but he did break off an impressive 4.64 at his pro day. He also got into some off the field problems in 2006 but heading into this past season his stock was much, much higher than it is now. Projected Round: mid 4th to late 5th

Compares to: Bart Scott (formerly of the Ravens)

Pros - Ellerbe has a well built frame that should be able to add some bulk without effecting his athleticism. He's got above average straight line speed and solid quickness and acceleration. He's physical in the running game, showing the ability to take on and shed blocks while maintaining his aggressiveness. He's an explosive hitter when the meets the ball carrier and the quickness to beat blockers to the play. He's a good pass rusher and one of the better cover linebackers in the country. He gets deep into his drops, looks comfortable in space and has shown the ability to bait quarterbacks by reading their eyes.

Cons - He's a tad undersized, especially for a 3-4 backer, and he too often relies on his athleticism to make plays instead of playing within the system. He can miss some tackles when trying to go high for a big hit. Overall his lack of consistent productivity combined with an off the field incident in 2006 (DUI) have hurt his stock.

Scott McKillop (6'1 245): McKillop is another 'lunch pail' guy taken from the same mold as Jason Phillips. McKillop took over as the starter in 2007 and all he did was total 288 tackles, 27.5 for loss and seven sacks over the past two seasons en route to back to back first

team All-Big East teams and the 2008 Big East Defensive Player of the year award. As expected, he didn't turn anyone's head working out in shorts and a t-shirt (4.79 forty) but his abilities are apparent when you watch tape on him. Teams will have to decide if his productive college career will translate to the speed of the NFL game. Projected Round: 5th round

Pros - McKillop is an extremely hard worker with a ton of football intelligence. He's got great instincts on the field and is a solid tackler. He moves well in trash and always seems to find himself around the football. He has shown some ability to handle his own is shallow zones and can pick up a receiver or tight end coming across the middle. He was team leader at Pitt and extremely productive.

Cons - McKillop's game is limited because he does not have great athletic ability. He has trouble chasing down plays from behind and needs to get stronger to take on NFL lineman. He can really get into trouble when he gets too aggressive as he doesn't have the speed or quickness to compensate. He doesn't have very good ball skills and isn't doesn't offer much as a pass rusher.

Antonio Appleby (6'3 245): Appleby has been overshadowed by the likes of Chris Long and Clint Sintim but his size and physicality is a big reason why Virginia's 3-4 defense was successful. He's

been a three year starter averaging 67 tackles, five for loss and just over a sack per season. Of all the linebackers in the draft, he's got the most experience in the 3-4 and some scouts even suggest he could contribute immediately despite his mid-to-late round draft grade. Projected Round: late 5th to early 7th

Pros - Appleby has prototypical size and build for a 3-4 inside backer with above average athleticism for his size. He's a tough, physical player who's got the upper and lower body strength to handle even the biggest linemen. He's also has good lateral agility to avoid blockers and work his way to the ball where he's a solid tackler. He's a decent blitzer and can hold his own in coverage on a limited basis.

Cons - Despite his strength and power, Appleby can struggle to disengage from blocks once the defender latches on and his instincts and football IQ leave something to be desired. His motor can be inconsistent and some scouts project him as strictly a 'two-down' player.

As you might expect there are some other guys on towards the bottom of the list that we didn't mention, such as Nick Reed (Oregon), Frantz Joseph (Florida Atlantic) and Josh Mauga (Nevada) but the present list paints a pretty solid picture. It's pretty clear that if the Cardinals want to target an ILB in the middle to late rounds, there are some interesting names out there especially considering nothing is expected from them in 2009. Who stands out to you and who's name did we miss?