It's no secret that the Arizona Cardinals will look to add some youth and athleticism at their outside linebacker position. The current group of Chike Okeafor, Clark Haggans, Bertrand Berry and Travis LaBoy are serviceable but age and injuries are getting the best of them. We've spent a great deal of time profiling some 'hybrid' outside backers in the past month or so, but what if none of the highly rated prospects are available when the Cardinals pick at 31 or 63?

The Cardinals are fortunate enough to have the current depth to allow a draft pick to ease into the transition from college DE to professional OLB and there are plenty of guys who should be avaliable in the middle to later rounds. Here's a look at some prospects who the Cardinals could be interested in during the second day....

Here are the guys that we've already profiled:

But as you might expect, that's just a small sampling of possible 'hybrid' guys that could entice the Cardinals this weekend.

Paul Kruger (6'4, 263): Believe it or not, Kruger is a polarizing figure in this year's draft. Some scouts compare him to LaMarr Woodley or Aaron Kampman (who's 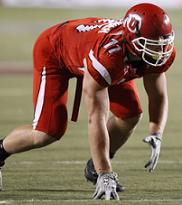 expected to move to OLB this year), while other scouts simply don't think he has the athleticism to handle an outside linebacker spot. It's clear that he'd be an awful big OLB and his workout numbers (4.8 forty) haven't helped his case among 3-4 teams. He'll be a 24 year old rookie, one red shirt season and two years on a church mission, but his ability to battle is unquestioned. Projected Round: late 2nd to middle 3rd

Pros - He's got solid frame that still has room to grow, if need be, and he's a decent athlete. His non-stop motor is what sustains him and he's very tough with above average strength. He does well in pursuit and is a reliable tackler. He's comfortable in space and he's a smart player who won't often get fooled by play action or misdirection. He's got some experience playing with his hand off the ground and has looked capable in coverage.

Cons - Kruger's isn't a natural athlete and looks stiff at times. He lacks top end speed and doesn't always play as powerful as his frame would indicate, especially when he plays too tall. His pass rush repertoire is very limited and he too often relies on a bull rush that worked in the Mountain West but might not generate the same results against NFL tackles. A lack of experience is also a concern considering that he only played two years at Utah.

Jason Williams (6'1, 241): Williams is one of the fastest risers in the entire draft

right now after blazing the forty at his pro day to the tune of 4.46. Some teams didn't trust the time after hearing that he ran on a basketball surface so Williams responded by running again. The second time he ran on field turf and blazed even more when he turned in a 4.42. Wiliams began his college career as a strong safety before moving to OLB in 2006. Just about every NFL team has kicked the tires on Williams, regardless of defense, but he's certainly showing the athletic ability to excel in a 3-4. In his three seasons as an OLB he averaged 89 tackles, 15 for loss and five sacks per season. Projected Round: middle 3rd to 4th

Pros - His athleticism and speed are unmatched as well as his burst off of the line. He's an explosive leaper who will knock down passes at the line and he has a knack for jarring the ball loose (14 career). His experience as a strong safety makes him very comfortable in coverage and he's got the range make plays sideline to sideline. He's got a good motor and will make plays in pursuit.

Cons - His level of competition has some tempering his potential and right now he still plays like a safety against the run. He'll have to get stronger and more physical at the point of attack to be an every down player. He can get out of position when he gets to aggressive as well.

Brandon Williams (6'5 252): Williams comes off a junior season that saw him

lead the Big 12 in sacks and earn 1st Team All-Big 12 honors, but most scouts feel that he should have stayed for his senior season. While there is no argument about his ability to rush the passer, his detractors point out that he offers very little against the run (but in the Big 12 what do you expect?). His draft stock took a significant hit at the combine when he ran a 4.96 forty (a 306 pound OT ran faster), but he's since improved his time at his pro day with times as high as 4.69. There's no doubt that he's a raw player who will take some time to develop but the potential is evident. Projected Round: late 3rd to 4th

Pros - Williams' lanky, athletic frame is has the room to add another ten to fifteen pounds with sapping his burst or speed. He's got a tremendous burst off the snap and has a decent set of pass rush moves. He has shown the ability to bend around offensive tackles and close on the quarterback. He tracks down plays in pursuit and chases plays down the line.

Cons - For everything Williams does in getting to the quarterback, he lacks the size, strength and physicality to hold the point of attack against the run. He hasn't been asked to drop into coverage much and looks stiff in space. He's also not a powerful tackler and struggles to disengage from blockers.

Zack Follett (6'2 238): Follet should be an interesting prospect for just about every

3-4 defense in the league for a couple of reasons. He's played every linebacker position after coming to California as a middle linebacker before finally ending up on the outside. He also flourished in his senior season when Cal switched to a 3-4 defense which means he's got more experience than just about every other backer in the draft. He has a history of shoulder problems and won't wow scouts with his athletic feats but he's been solid locker room guy and he's been productive where ever he lined up. He totaled 87 tackles, 23 for loss and 10.5 sacks in 2008 after averaging 63 tackles, 12.5 for loss and 5.5 sacks his previous two seasons.

Pros - Follett has very good strength for his size and his frame has the room add another ten to fifteen pounds. He can hold the point of attack where he's a reliable, punishing tackler. He plays with a reckless abandon when the play is in front of him and his competitive spirit drives him to make plays. He's an intimidating player who is a plus pass rusher who is also capable in coverage.

Cons - His size isn't what you'd expect from an outside backer and he's not a great athlete. He has some durability issues and his aggressiveness can get him into trouble. His lateral quickness isn't great and he doesn't have the ability make up ground when fooled.

Matt Shaughnessy (6'5 263): The report on Shaughnessy is pretty similar to Paul Kruger, except that Shaughnessy isn't very stout at the point of attack. He's a bit faster than Kruger, but not by much, and scouts go both ways on his ability to stand up and play outside linebacker. He's added over 30 pounds 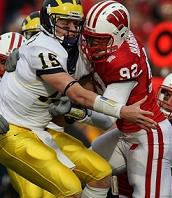 since showing up to Wisconsin as a 230 pound freshman so his frame is nearly maxed out but he carries it pretty well. He hasn't been as productive, in terms of sacks, as most of the guys on this (15.5 in 50 career games) but he's tough player who's played through a ton of injuries. One thing that's rather remarkable is that he's missed very little time despite several major injuries including broken fibula in the spring of '08 and tearing his ACL at the end of the 2006 season. Projected Round: late 4th to 5th

Pros - Shaughnessy has the size and bulk to play the position and uses his height well to knock passes down. He uses his hands well to disengage from blockers and stave off cut blocks. He uses the bull rush and rip technique well as pass rush moves but the rest of his repertoire is pretty limited. He has some experience playing from a stand-up position and looks comfortable in space. He's a smart player who uses a non-stop motor and good instincts to make plays.

Cons - Shaughnessy lacks the explosive burst off the snap that outside backers need to make a difference in pass rush situations. He also needs to get stronger to hold the point of attack and he'll have to develop more pass rush moves to be effective. Injuries might have robbed him of the explosiveness that he had earlier in his career as he takes a while to get up to speed.

Henry Melton (6'4, 269): Melton was first brought up here at ROTB when he appeared in a mock draft created by one of our very own and he's an interesting yet extremely developmental prospect. He began his college career as a running back and has only been on

the defensive side of the ball two seasons. As you might expect being a former running back, Melton has tons of athletic ability but is far from a finished product. He wasn't even considered a 'draftable' prospect after one season as a starter that produced 10.5 tackles for loss and four sacks but a forty in the 4.5 range changed all of that. Wherever Melton ends up, patience will be key as he'll take a year or two to learn the position but the athletic ability is unquestioned. Projected Round: late 5th to 6th

Pros - With loads of athletic ability, Melton's speed, quickness and burst make him unique. He's got good balance and agility and is a force in pursuit. He's got more strength that you'd expect from a former running back and he could be a solid special teamer early in his career.

Cons - Raw, raw, raw. Melton got by on his athletic ability during his one season as a starter and his techniques and instincts have to come a long way before he can step on an NFL field. He also has an off the field incident when he was arrested for DWI in May of 2007.

Stryker Sulak (6'5, 251): Sulak's an accomplished player with four years of starting experience and he even thought about going pro after this junior. He's improved each year as at Missouri but most scouts still slap the overachiever label on him 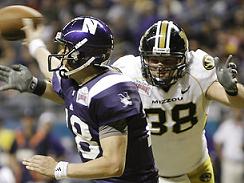 and wonder if he'll have the ability to hold his own in space. He's dealt with some injuries during his four seasons but in 53 games he's still managed 38 tackles for loss and 22.5 sacks, including 15.5 & 10.5 respectively his senior year. Projected Round: 7th

Pros - Sulak's a decent athlete with slightly above average speed and quickness but he makes a difference with his non-stop motor and burst to close on the ball carrier. He's got good instincts and awareness and is a hard worker.

Cons - Sulak's not going to blow anyone away with his athletic ability and he'll have to get stronger to maintain the point of attack. He hasn't been asked to drop into coverage very often but he looks uncomfortable and stiff in space.

The Arizona Cardinals enter this weekend's draft looking for at least one, if not multiple players to help energize their struggling pass rush. In a 3-4 defense, they'll need that pass rush to come from their outside linebackers. While most of these guys won't contribute much in 2009 outside of special teams, they're stacked with potential to be the future of the Arizona Cardinals. Which guy stands out to you guys? Are there any names that we missed?