The Jets are really looking for a QB but there's not that's even close to a second round pick so instead of drafting their future QB, they draft the guy who might end up having his back for the next decade. Jamon Meredith 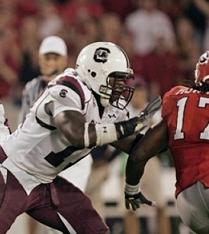 is a smart, experienced player with 38 starts in his collegiate career. He has started games at both tackles and guard and he's proven to be a team player. He's better suited to play tackle at the pro level where his strengths in pass protection can be an asset. Offensive tackle isn't a huge need for the Jets but starting right tackle Damien Woody isn't getting any younger (will turn 33 during the season).

Positives: Meredith has good size and great athleticism. He's got quick, agile feet to be a plus pass protector and long arms to keep defenders at bay. He's athletic enough to get to the second level and even pull. He's a natural knee-bender and can be a factor cut blocking defenders.

Negatives: Meredith is a bit of finesse tackle who needs to get more physical at the point of attack. He doesn't always use his hands well and lacks the killer instincts to finish blocks. He just needs to play more aggressive in all aspects on the game.

Many thanks to RedBirdsRule for submitting this pick. The Eagles and AJBirdwatcher are now on the clock (email pick to revengeofthebirds@gmail.com) with the Vikings and jallred350 on deck. If anyone needs to refresh their memory on the second round draft order, check here.

Also guys, we're in draft 'crunch time' right now with twelve picks to cover in the next three days so we're going to be hitting these fast and furious. If you can, send a list of three players who you'd like to draft as your pick approaches so that we can stay ahead of the action and knock these picks out quickly.