The Eagles first pick in the second round goes to defense and even though they could use a safety, Byrd offers the best value at 53. Some scouts think 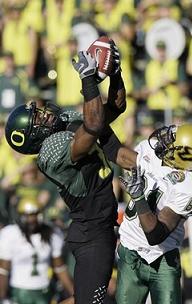 that Byrd could eventually move to safety where his lack of great top end speed wouldn't be such a liability but for the time being, he'll just be a jack of all trades. He's got the ability to learn on the fly and be a possible replacement for Sheldon Brown, who recently celebrated his 30th birthday.

Positives: Byrd's a well built athlete with decent size and bulk. He's got the speed and fluidity to turn and run with receivers and the strength to get a solid jam at the line of scrimmage. He's a natural play maker with soft hands and good ball skills. He's got good instincts and won't hesitate to support the run where he's a reliable tackler. He's got a strong work ethic and offers some versatility (returner and/or safety). His father was a two-time Pro Bowler with the Chargers and recently served as the Bears DB coach.

Negatives: Byrd is more quick than fast and will have problems trying to stay with a speedy reciever all the way down the field. He can get too aggressive at times and will be better suited for a zone scheme instead of man-to-man coverage. He's also a bit 'grabby' in coverage.

Many thanks to AJBirdwatcher for submitting this pick. The Vikings and jallred350 are now on the clock (email pick to revengeofthebirds@gmail.com) with the Falcons and Cardsfan08 on deck. If anyone needs to refresh their memory on the second round draft order, check here.

Also guys, we're in draft 'crunch time' right now with ten picks to cover in the next three days so we're going to be hitting these fast and furious. If you can, send a list of three players who you'd like to draft as your pick approaches so that we can stay ahead of the action and knock these picks out quickly.