The left side of the Vikings OL is as good as it gets with the combination of Steve Hutchinson and Bryant McKinnie. The team lost the anchor of the line when Matt Birk left for Baltimore, but feel that John Sullivan can step in at center and produce. That leaves the right side of the 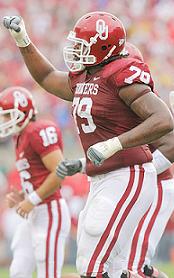 line, which was below average last year. With that in mind, the Vikings select 6'8", 330 pound, OT Phil Loadholt from Oklahoma. Loadholt is as big as they come and has some agility to go with his size. There are some character concerns and penalties have been an issue in the past, but if he can produce anywhere near his ceiling the Vikings should improve an already dominating running game.

Positives: Loadholt is a massive offensive tackle with devastating size and long arms. He's a dominating in-line drive blocker who looks intimidate his opponents. He's strong, physical and has decent athleticism and quickness given his size. He has decent mobility and a nasty demeanor to finish off blocks.

Negatives: As with almost any tackle of his size, Loadholt struggles with speed rushers and can get beaten off the snap. His massive size also makes him hard for him to recover once a defender initially beats him. He also needs to improve his technique because he too often relied on his size to engulf defenders. Some scouts suggest that he should move inside to guard while others say that his height would be a liability on the inside.

Many thanks to jallred350 for submitting this pick. The Falcons and Cardsfan08 are now on the clock (email pick to revengeofthebirds@gmail.com) with the Dolphins and CardsIrish on deck. If anyone needs to refresh their memory on the second round draft order, check here.

Also guys, we're in draft 'crunch time' right now with ten picks to cover in the next two days so we're going to be hitting these fast and furious. Please, send a list of three players who you'd like to draft as your pick approaches so that we can stay ahead of the action and knock these picks out quickly.