The Falcons used to have a great tight end in Alge Crumpler but last year their tight ends combined for just 19 receptions. As we all know, a good tight end greatly helps a young quarterback and the Falcons has a great young signal caller in Matt Ryan. The Falcons have some needs on defense but 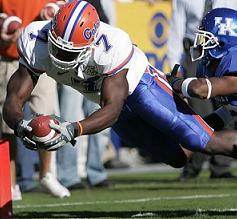 putting some more weapons around Ryan is also a big need. Ingram may be a work in progress but he's got a unique blend of size and athleticism and has the potential to be the best tight end in the draft in a couple of seasons. Here's the scouting report we put together as a potential draft pick:

Positives: Ingram is a big tight end that has the ideal frame and muscle mass for the NFL. He's still has plenty to gain and it wouldn't affect his speed either. Ingram was formally a quarterback in college and made the transition to tight end early. He was able to bulk up, learn the position, and develop into one of the top tight ends in the nation. Due to his previous position, Ingram has good peripheral vision and has soft hands. He's a strong athlete and is an animal in the weight-room. He has above average speed and can out-run most linebackers. He uses his natural ability to gain extra yardage after the catch. He's a decent route-runner and gets off of jams fairly quickly. He will often extend to make a play and he has enough of a vertical to go up for the big catch.

Negatives: Ingram is a project player and still needs more experience to help a team in the NFL right away. He's your classic under-achiever and needs something to motivate him. He needs to polish more parts of his game and struggles to learn quickly. He can often make bonehead mistakes or line up incorrectly. He's more fit as a slot receiver and could make the transition in the NFL. He doesn't play with a passion and needs to develop a stronger work ethic. He tried quitting 2 times at Florida and most believe that he doesn't strive to win. He's not an NFL-ready  blocker, and only is a productive blocker in the secondary. He goes with the motion when running routes and he won't sacrifice his body to make a catch.

Many thanks to Cardsfan08 for submitting this pick. The Dolphins and CardsIrish are now on the clock (email pick to revengeofthebirds@gmail.com) with the Ravens and Red Reign on deck. If anyone needs to refresh their memory on the second round draft order, check here.

Also guys, we're in draft 'crunch time' right now with nine picks to cover in the next two days so we're going to be hitting these fast and furious. Please, send a list of three players who you'd like to draft as your pick approaches so that we can stay ahead of the action and knock these picks out quickly.