The Phins have needs at wide receiver, but Bill Parcells likes to build dominating defenses and Jarron Gilbert is another step in that direction. He isn't a sexy pick but a 3-4 defense starts with the wide bodies on the defensive line and Gilbert has the perfect size for a 3-4 defensive end. He's got the 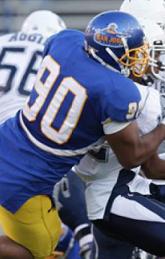 ability to occupy blockers, allowing the linebackers to flow to the ball, and the skills to make plays on his own. He led the NCAA in tackles for loss in 2008 and is a great value in the late second round.

Positives: Gilbert has great size and is very athletic for his size. He's naturally strong and quick enough to penetrate off the snap and blow plays up in the backfield. He has good range and pursues well, with solid instincts and awareness. He's got some upside and is a hard worker.

Negatives: He's a bit inconsistent and could be more physical, especially for his size. He's doesn't use his hands well and to this point has relied on his athleticism to beat defenders. His level of competition also raises questions.

Many thanks to CardsIrish for submitting this pick. The Ravens and Red Reign are now on the clock (email pick to revengeofthebirds@gmail.com) with the Patriots and my wife on deck. If anyone needs to refresh their memory on the second round draft order, check here.

Also guys, we're in draft 'crunch time' right now with eight picks to cover in the next two days so we're going to be hitting these fast and furious. Please, send a list of three players who you'd like to draft as your pick approaches so that we can stay ahead of the action and knock these picks out quickly.