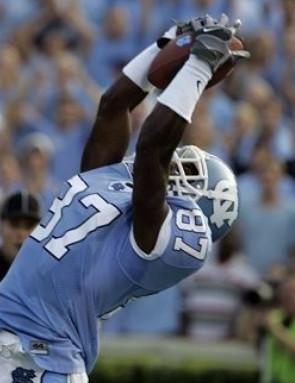 Mushin Muhammed is getting old. Carolina could use a a good, young receiver to eventually fill his role. Injuries, however are a concern.

Positives:  Tate shows good quickness and a burst of speed in his play. He is a quick-handed receiver with good body control, change of direction agility and explosion in his run after the catch. He displays very good athletic ability on the field, especially on special teams.  With his long, lean build, Tate shows good quickness, strength and hand usage to get off the snap and into his patterns. He has a smooth and fluid release off the line of scrimmage and is able to beat press coverage. He has the power to push through the jam with no hold-ups.

Negatives: He runs adequate routes, showing inconsistent ability to sink his hips, as he is prone to getting upright in his stance, which affects his initial explosiveness. He needs to generate sharper cuts on intermediate routes and run with little gather in and out of his breaks, but is showing improvement. Tate recently failed a drug test and it has hurt his draft stock. He's also recovering from a MCL tear but should be ready by training camp.

Many thanks to Aces for submitting this pick. The Giants and ianbbc02 are now on the clock (email pick to revengeofthebirds@gmail.com) with the Colts and IrishCardinal on deck. If anyone needs to refresh their memory on the second round draft order, check here.

Also guys, we're in draft 'crunch time' right now with six picks to cover in the next two days so we're going to be hitting these fast and furious. Please, send a list of three players who you'd like to draft as your pick approaches so that we can stay ahead of the action and knock these picks out quickly.