Share All sharing options for: Breaking Down the Arizona Cardinals 1st Two Rounds

The Cardinals finished Saturday with what would appear to be a very good first 2 rounds of the draft. They established needs in running back and outside linebacker. Chris "Beanie" Wells was taken 31st overall, and Cody Brown, a potential draft pick of ours, was indeed taken in the 2nd round. Lets dive into how this affects the Arizona Cardinals. 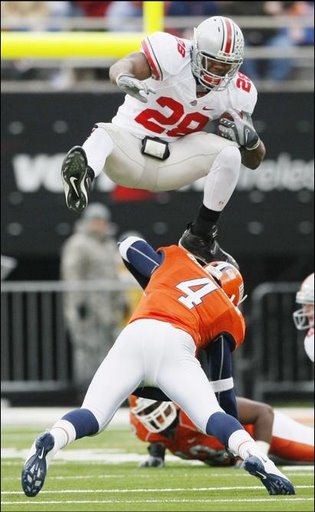 Wells joins one of the most explosive offenses in the league that features the best wide receiver tandem. He also joins sides with fellow running back, Tim Hightower. Wells is your typical North and South runner, who shows exceptional burst up the middle. He's got a fierce stiff-arm and great power. He compares to running back Steven Jackson, with the size (235 lbs), and speed. When the season begins, Wells may very well be the starting running back for the Arizona Cardinals. He may not get a great deal of carries, but he's sure to make an immediate impact. Most teams will be loading their secondaries on Larry Fitzgerald after his playoff performance last year. Then throw in fellow Pro Bowl Receiver Anquan Boldin, and 1,000 yard receiver Steve Breaston. Oh and don't forget the 2-time MVP in Kurt Warner who had one of his best seasons in his career last year. This offense could very well be 1st in the league in 2009 and that is a scary thought considering they were top ranked in '08 with the worst rushing attack. With the addition of Beanie Wells and a likely threat in the running attack, you can truly tell opponents to, 'pick your poison'. 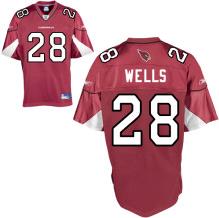 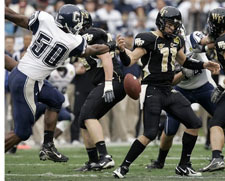 If Alex Wood wasn't available in our ROTB community mock draft, we would've been right on the money so far because Cody Brown would've been the pick. Either way, the Cardinals got their man on the defensive side of the ball. They may have gone BPA, but linebacker was a very strong need this off-season. They currently have a good amount of aging veterans in the line backing corps, and still have to fix the Karlos Dansby contract situation. Brown gives them a great addition, as he will provide the pass rush they missed last season. Don't forget that it was the defense that blew the game winning drive of the Steelers in the Super Bowl. He's a very explosive defender and won't be needed at defensive end with Calais filling that void. He's got a great burst off of the side and may end up being a steal at 63rd overall. If he can learn a thing or two from the veterans, he can be a force on the defensive side of the ball for years to come.

Overall, you can't be upset with the Cardinals 1st day draft picks. They didn't come away with any head-scratchers, or reaches, and both picks may be steals at their landing spots. Tomorrow should be sure to fill a few more holes on the team, including offensive lineman, tight end, and linebacker. Tune in for an open thread and draft coverage of who is taken.