With the 95th Overall Pick (3rd Round), the Arizona Cardinals Select:

Share All sharing options for: With the 95th Overall Pick (3rd Round), the Arizona Cardinals Select:

A complete unknown coming out of high school, Johnson was just grateful that  former Tide head coach Mike Shula even let him try out for the team when he arrived on campus as a freshman in 2004. Now, after completing his final season, the team captain leaves the college game regarded as the premier safety in the Southeastern Conference.

When Johnson came to Tuscaloosa, he was a running back out of Sulligent, Alabama, a small town about an hour from Jasper and home to a tiny 1-A high school. After a redshirt season, Johnson made the move to defense in 2005, but saw no action short of special teams work. In 2006, he finally got a chance to start four times, but still saw limited action at safety. After a coaching change and a tireless spring, 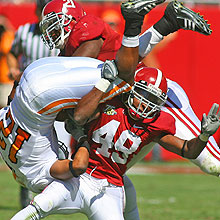 he earned a starting job in the defensive secondary, and he did little to disappoint during his stellar junior and senior campaigns.

Now, the Tide will look to replace his 224 tackles and his senior leadership. Even the coaching staff admits that Alabama will be hard pressed to find someone who can replicate Johnson's sense of awareness and overall ball-hawking skills that led to a combined 11 interceptions over the past two seasons.

As a special teams performer in 2005, Johnson totaled eight tackles (5 solos) and caused one fumble in 12 contests. He forced his way into the starting lineup for four games at free safety in 2006, but missed two late season contests with an ankle sprain. He finished with 33 tackles (22 solos) and two forced fumbles, as he also tried his hand at kickoff returns, gaining 64 yards on three chances.

With Saban taking over the coaching reigns, Johnson's career began to take off. The junior free safety not only earned a starting job, but was named team captain. He collected a team-high 94 tackles (57 solos) with a sack and 5.5 stops for loss in 2007, picking up All-Southeastern Conference first-team honors. His six interceptions rank seventh on the school single-season record list and he also broke up eight throws and caused one fumble.

Johnson was a unanimous All-SEC first-team choice in 2008. He received SEC Defensive Player of the Year honors, as he delivered 89 tackles (60 solos), ranking second on the team. He had five stops behind the line of scrimmage and caused a fumble for the fifth time in his career. The safety led the Tide with five interceptions and 11 pass breakups, as he guided a squad that ranked third in the nation in total defense (263.5 ypg).

Positives: Cerebral defender. ... Reads the action quickly and puts himself in position to make big plays. ... Quick to recognize run and is able to often get to the ballcarrier before blockers can be effective. ... Reliable centerfielder who understands his position as the last line of defense and can break down in space to make the open-field tackle. ... Faster on the field than his 40 time would indicate due to his instincts. ... Natural playmaker. ... Baits the quarterback and has a good burst to close. ... Will fight for the ball and can snatch the ball at its highest point. ... Can track the ball over his shoulder. ... Has a history of making the big play at critical moments.

Negatives: Has a skinny build. ... Needs to bulk up in both his upper and lower body to be able to handle taking on blockers at the NFL level. ... May struggle to maintain his questionable pure speed with additional mass. ... Can get caught up in the trash. ... Not as reliable a tackler near the line of scrimmage, as he is willing to lunge with teammates supporting around him. ... Not a tone-setter in the middle capable of intimidating with big hits. ... A bit high-cut and struggles to keep up with receivers in man coverage. ... Character red flags due to a February 2008 arrest for disorderly conduct.