With the 131st Overall Pick (4th Round), the Arizona Cardinals Select:

Share All sharing options for: With the 131st Overall Pick (4th Round), the Arizona Cardinals Select:

Toler was one of the premier athletes in the Washington D.C. prep ranks, the talented defender never got the opportunity to wear a college uniform, much less 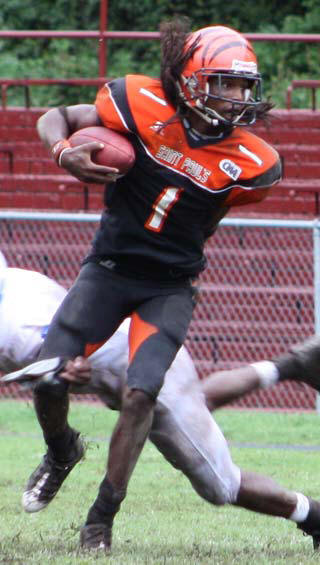 Toler exhausted his first chance at football stardom at Northwestern High School because of poor grades. Once recruiters from Division I schools viewed his high school transcripts, he was not interested. His grades made it a struggle to stay eligible for his senior football season.

At the end of his senior high school season, Toler was ineligible to attend high school all-star games, missing a chance to earn an athletic scholarship from a major university.

"I never took my grades seriously like I should have," he said. "My coaches kept telling me that education's first, that you'll never be a student-athlete unless you're a good student."

After graduation, Toler wound up as a storeroom clerk at JCPenney, stocking shelves and sweeping aisles. He was living at home with his mother and older brother, knew he had the potential to be a college athlete, but that opportunity, he figured, was gone. That was until he met Wilson High School football coach Mark Martin, who recruited Toler for his semipro football team, the D.C. Explosion.

After a few games with the Explosion, Toler was approached by Kevin Grisby, a defensive coordinator at Saint Paul's College, the historically black school tucked into the Blue Ridge Mountains of southern Virginia. Budget cuts killed the college's football program in 1987 but wanted back in, billing itself as the place giving recruits a second chance. It was a school where players with Division I talent could continue to play despite previous off-field problems.

Grisby immediately found a disciple in Toler, whose father had died in the Lorton prison while serving time for drug possession, and he used the one year that St. Paul's competed as a club team to focus on his grades.

"It started off rough, but we worked his grade-point average up, meeting once a week just to talk about his academics," said Grisby, a former NFL safety with the Philadelphia Eagles.

Toler quickly grabbed a starting position at left cornerback, going on to start his next 40 contests. He set school career records with 14 interceptions, 36 pass breakups and 50 passes defended (average of 0.80 passes defended per game was the top career mark for active Division II players in 2008).

In his first college season, Toler garnered All-CIAA first-team honors, in addition to making the league's All-Rookie squad. In 10 games, he recorded 38 tackles (24 solo) with three stops for loss. He recovered a fumble in the end zone for a touchdown and broke up 13 passes in 2005. His six interceptions tied for 18th in the NCAA Division II ranks, while his total of 19 passes defended placed third nationally.

In 2006, Toler produced 35 tackles (24 solo), picking off one pass while batting down three others during a "sophomore slump." He bounced back with a banner junior campaign, receiving All-CIAA first-team honors. He had an interception with seven pass deflections, averaging 8.2 yards on ten punt returns and 16.8 yards on six kickoff returns. He also ranked eighth on the team with 37 tackles (16 solo), as he did not allow a pass reception in four of 10 games he started.

The left cornerback earned All-CIAA and Little All-American first-team honors in 2008. He placed fourth on the team with a career-high 51 tackles (37 solo), including 4.5 stops behind the line of scrimmage. He tied for ninth in the nation and second in the league with six interceptions and set the school record with three blocked kicks, returning one blocked punt for a touchdown. He knocked down 13 other tosses, as his total of 19 passes defended tied for the CIAA title while ranking second nationally.

Positives: He has good change-of-direction agility and the sudden burst needed to close on the play. He will generally stay under control coming out of his pedal and has the natural ability to open his hips in order to generate a quicker second gear. He possesses smooth hips in transition and natural hands to field the ball. While lacking in ideal strength, he shows good athleticism for the cornerback position. Marginal student, but is good picking up schemes and reacting to plays in front of him. Well-liked by staff and teammates. Effective in man coverage and gives total effort on the field. Volunteered to play on all the special team coverage units, in addition to handling return chores. Good toughness in run support (made 23 plays vs. the ground game in 2008) and picks up schemes easily.

Negatives: Toler was hailed as having blazing speed, but he is quicker than he is fast on film. Questionable zone-anticipation ability (stares into the backfield and fails to handle the switch effectively on combo routes). Not the type to make calls and keep defenders in position, but does not need more than a few reps to retain plays. Compliant in the weight room, but his numbers there indicate that he still has a long way to go before he can compete for a position at the NFL level. When he gets too high in his stance, he will take false steps in transition.

Compares To: MARCUS TRUFANT, Seattle -- Toler returned to freshman form in 2008 and has very good quickness on the field. He is a work in progress handling zone coverage responsibilities and lacks the strength to attack ballcarriers. His strength issues also come into play when he fails to jam receivers at the line of scrimmage. There is much for him to learn, especially coming from his level of competition. However, cornerback is a position at which you can draft an athlete first and hope to develop his football skills.