With the 167th Overall Pick (5th Round), the Arizona Cardinals Select:

Share All sharing options for: With the 167th Overall Pick (5th Round), the Arizona Cardinals Select:

One of the most physically imposing players in college football, Johnson is a 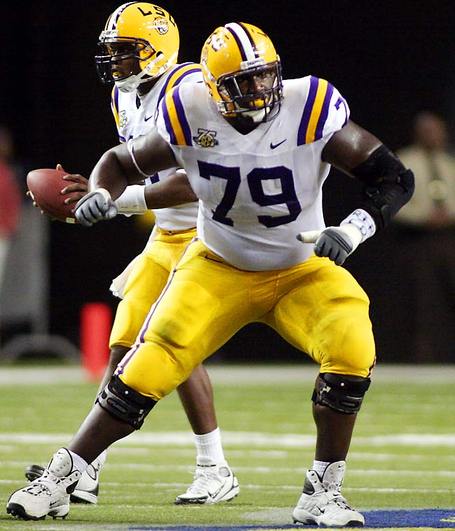 tremendous physical specimen. The biggest player to ever wear the purple and gold, Johnson started the final 38 games he appeared in, lining up at right offensive guard in three of those contests before taking over left guard duties.

Despite his massive frame and considerable bulk, Johnson is surprisingly light on his feet, registering 16 down field blocks over the past two seasons. He shows very good mechanics for a player of his size and his road grading ability could see him shift to offensive tackle in the NFL, as he also has performed at right tackle during the earlier stages of his career with the Tigers.

Being the "big man on campus" is nothing new for Johnson. He was the largest baby born in Louisiana, weighing in at 15 pounds, 14 ounces. The doctor who delivered Herman told his mother at the time that he was a future LSU Tiger. To this day, the doctor who delivered him calls Herman's mom each year, letting her know that her baby is still the largest ever born in the state of Louisiana.

His mother, Karen Johnson, was a versatile athlete at LaSalle High School, and her son had many of her athletic traits. As he continued to grow, he did not seem interested in playing football. "When I played youth league football, I was always bigger than everybody, but I never liked it," said Johnson, whose family moved from Olla to Denton, Texas, when he was very young. "I had a bad experience. We always lost." It was not until he enrolled at Denton High School that the "football bug" began to take hold.

Still it took several years before the school's coaching staff was able to convince him to give football a chance. Standing 6-foot-5 at age 14, he was soon noticed for his hulking presence by the staff. "They told me I could get a scholarship to college, get an education and maybe go off to the NFL and be a millionaire," Johnson said.

Affectionately nicknamed "House" by the Denton High School staff, Johnson was a standout offensive tackle, earning All-District first-team honors as a junior, and All-State first-team accolades in his final year. He was rated 30th on the Rivals.com national Top 100 list, and that recruiting service also ranked him as the third-best prep tackle in the country.

During his senior season, the almost 400-pound lineman was a member of the Texas Top 100 and Midlands Sweet 66 squads. He graded 88 percent for blocking consistency and did not allow any sacks in 2003, before going on to excel at the U.S. Army All-American Bowl.

Louisiana State beat out Oklahoma, Oklahoma State and Houston for Johnson's services. He appeared briefly in the Arkansas State and Mississippi State games before being granted a medical hardship in 2004. Prior to 2004 fall camp, he was bitten on his big toe by a spider back home and was slow to recover. After being limited to just 42 offensive snaps, the LSU coaching staff decided to retain his four years of eligibility and shut him down for the rest of the season.

Johnson appeared in 11 games as a redshirt freshman in 2005, seeing most of his action on the field goal and PAT protection units. He started against Vanderbilt at right guard, logging 160 snaps for the season. He allowed two quarterback pressures and no sacks while collecting 26 key blocks/knockdowns.

Johnson played in 12 games, starting the final 10 contests of the 2006 campaign. He sat out the Alabama clash with a toe injury, but earned two starting assignments at right guard for an injured Will Arnold before lining up at left guard for eight games. He posted 84 knockdowns/key blocks and played a big part in the team leading the Southeastern Conference and ranking 11th nationally with an average of 417.46 yards per game in total offense.

As a junior, Johnson started all 14 games at left guard. He delivered 60 key blocks/ knockdowns to go with 15 touchdown-resulting blocks. The big man also made eight down field blocks, as he allowed no quarterback sacks and just one pressure on 442 pass plays. With tackle Ciron Black and Johnson leading the way around the left side, the Tigers captured the national title while averaging 439.43 yards per game. For his efforts, Johnson was named to the All-Southeastern Conference first-team.

In 2008, Johnson repeated as an All-SEC first-team choice. He was also selected to the Associated Press All-American first-team. The offense failed to match their lofty numbers from their championship season, but still managed to average 368.08 yards per game. Their left guard recorded 64 knockdowns, 14 touchdown-resulting blocks and eight down field blocks. He allowed 3.5 sacks and three pressures on 391 pass plays.

Positives: Naturally massive man who looks to be in reasonable shape despite weighing in at nearly 350 pounds. Good initial quickness off the snap despite his size. Gives the defensive tackle a formidable jolt with his hand punch and settles into position. Generally plays with good leverage and has the upper body strength to extend his arms and keep the pass rusher at bay. Surprising lateral quickness and balance for a player his size. Alert pass blocker who keeps his head on a swivel. Good straight-ahead drive blocker. Gains movement on his initial surge and has the hand placement and strength to turn defenders from the hole. Slow to get to the second level, but gives good effort and is a such a huge diversion, he can effectively block defenders from the ballcarrier without making the play.

Negatives: Only has one season of starting experience and teamed with left tackle Cirron Black, a legitimate NFL talent in his own right, to anchor the left side. Can improve his sustaining of blocks. Can get fundamentally lazy and attempt to latch on to defenders, rather than moving his feet, making him susceptible to coverage sacks. Has struggled with weight issues in the past -- arrived at LSU at more than 400 pounds.