With the 204th Overall Pick (6th Round), the Arizona Cardinals Select:

Share All sharing options for: With the 204th Overall Pick (6th Round), the Arizona Cardinals Select: 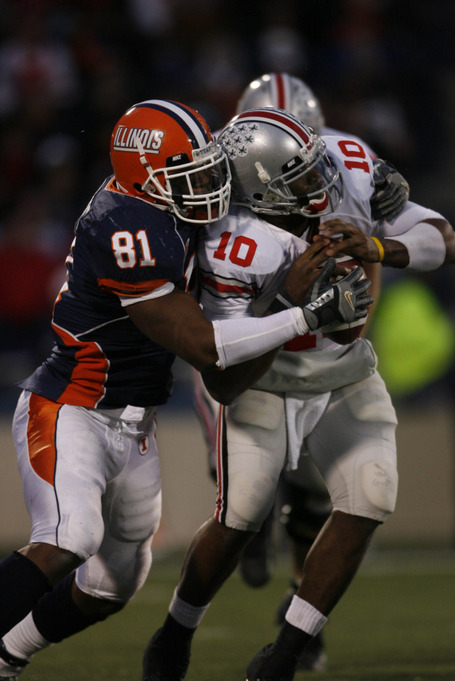 including 9.5 sacks, as a junior to earn second-team All-Big Ten honors. But he took a step backward in 2008 with teams having a year of film to study, and his production plummeted (seven tackles for loss, 3.5 sacks). Davis has rare foot quickness and straight-line speed -- to be expected of a former receiver -- for a defensive end, though he was sapped of some of that speed by nagging ankle injuries. His lack of upper-body strength and hand technique usually means that if blockers can get their hands on him, he's rendered ineffective quickly. A team willing to spend a second-day draft pick could get a nice return on their initial investment if they can get Davis to work in the weight room.

Positives: Good initial quickness off the snap. ... Can force the tackle outside with his speed, creating lanes for blitzing teammates or for himself to spin back inside. ... Rare straight-line speed for the position. ... Good effort to make plays in pursuit. Understands his role in the defense and generally plays with good contain. ... Can string the play out wide. ... Adequate lower-body strength to anchor. ... Good lateral agility and balance to tackle in close quarters. ... Ascending player who is still learning the nuances of the position after moving from offense to defense.

Negatives: Lacks the bulk and strength to consistently hold up at the point of attack. ... Adequately effective holding up against one blocker in the running game, but lacks the sand in his pants to split the double team. ... Struggles to disengage once the blocker gets a hand on him. ... Relies on his speed as a pass rusher and is essentially a one-trick pony at this time. ... Not often asked to play in space and has little experience in coverage, making the projection to a rush linebacker position a risky one.