With the 240th Overall Pick (7th Round), the Arizona Cardinals Select:

Share All sharing options for: With the 240th Overall Pick (7th Round), the Arizona Cardinals Select:

2008 Scouting Report: Veteran tailback who provides Pitt with another speedy and 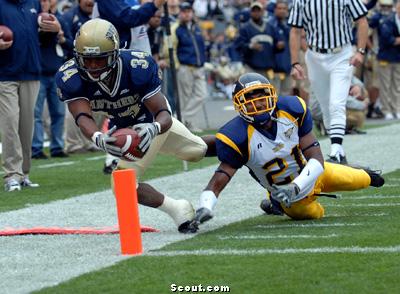 elusive backfield threat...while smaller in physical stature, can be a highly effective runner with his exceptional burst and shiftiness...also an asset in the pass game with his receiving skills...packs impressive muscle on his 5-7 frame...exemplary in his dedication and work ethic..."He does all the little things the right way," running backs coach David Walker says. "He is a model student-athlete and an excellent example for every player on our team."...experience will be a valuable commodity for Pitt's offense...enters his senior year having played in 31 career games, making 16 starts... a past honoree on the Big East All-Academic Football Team.

2007: Played in 11 games, starting two...missed the Michigan State contest due to ribs injury (sustained vs. Grambling)...rushed for 320 yards on 78 carries (4.1 avg.) with one TD...as a kick returner, averaged 20 yards on five attempts (100 yards total) for the season with a long return of 45 against Navy...against the Big East's top rushing defense at the time, Stephens-Howling came off the bench vs. Cincinnati to average nearly eight yards per carry and compile 100 rushing yards on just 13 attempts...he scored the game-winning TD on a seven-yard burst with just over five minutes remaining...on the final TD drive, accounted for 52 of the 61 yards covered by rushing for 42 yards (on six carries) and catching a 10-yard pass... rushed for 67 yards on 16 carries (4.2 avg.) vs. Eastern Michigan in the opener...made his season debut as a kick returner vs. Navy and had 84 yards on four returns (21.0 avg.), including a 45-yarder.

2006: Paced Pitt with 893 rushing yards on 178 attempts (5.0 avg.)...team's second-leading scorer with 60 points (nine rushing touchdowns and one receiving TD)...finished fourth in the Big East in rushing (81.2 yards/game) and all-purpose yards (105.0 yards/game)...played in and started 11 games, missing the Sept. 8 Cincinnati contest due to a right ankle injury...rushed for a career-best 221 yards on 27 carries, including a 70-yard TD run, at Syracuse...averaged 8.2 yards per carry en route to becoming Pitt's first 200-yard rusher since Nov. 24, 2000, when Kevan Barlow had 272 against West Virginia...Stephens-Howling was not tackled for a single loss against the Orange...his 221-yard rushing performance was the 10th highest single-game net rushing total in Division I-A during the 2006 season...named Big East Offensive Player of the Week for his Syracuse performance...rushed for 154 yards and two TDs on a career-high 32 carries at Connecticut...at UCF rushed for a career-high three TDs and netted 135 yards on 19 carries (7.1 avg.)...TDs covered 23, 26 and six yards...had 66 yards on 13 carries (5.1 avg.) with one rushing TD vs. The Citadel...also had two catches for 38 yards, including a 30-yard TD catch off a gadget-play pass from tight end Darrell Strong against The Citadel...rushed for 58 yards on 17 carries (3.4 avg.) and had two receptions for 37 yards (18.5 avg.) against Virginia before leaving the game late in the first half due to an ankle injury...named to the 2006 Big East All-Academic Football Team.

2005: Led Pitt in rushing with 434 yards on 96 carries (4.5 avg.) in nine games as a true freshman...made three starts...also contributed as a kick returner and had five returns for 151 yards (30.2 avg.) and a 95-yard TD...totaled nine receptions for 41 yards...actually started the Louisville game as part of a five-wideout set with no running backs...played in the season's first four contests before missing consecutive games (Rutgers and Cincinnati) due to an ankle injury...returned to the lineup versus South Florida Oct. 15 and rushed for a game-high 91 yards on 14 carries (6.5 avg.)...followed up the USF contest by rushing for a game and season-high 101 yards on 23 carries (4.4 avg.) versus Syracuse, the first 100-yard effort of his collegiate career...at Nebraska, rushed for a team-high 98 yards on 17 carries (5.8 avg.)...rushed for 42 yards on 10 carries (4.2 avg.) versus Youngstown State before leaving the game with an ankle injury...at Ohio, took the opening kickoff 95 yards for a TD...it was his first collegiate career kick return and TD.