With the 254th Overall Pick (7th Round Compensatory), the Arizona Cardinals Select:

Share All sharing options for: With the 254th Overall Pick (7th Round Compensatory), the Arizona Cardinals Select:

The three-time All-Big East Conference second-team selection was a driving force up front, serving as a mentor for a young offensive line that was called upon to 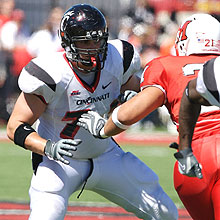 protect six different quarterbacks on the way to the 2009 Orange Bowl. Always known for his dominance in the trenches, the right offensive guard simply mauled his opponents during his final campaign.

Boasting a starting string of 39 games, the longest consecutive mark on the team, Canfield has proven his dominance in the trenches. In 42 total career starts (including three as a freshman), he delivered 300 knockdowns/key blocks, including 26 blocks down field and 37 touchdown-resulting blocks. On 1,374 pass plays, the team has given up 134 sacks and 80 pressures during Canfield's tenure as a starter, but the right guard was charged with only seven sacks and three pressures during that span.

The recipient of the team's Line of Scrimmage Award, Canfield was chosen the team's Outstanding Offensive Player and garnered second-team all-league accolades as a junior. As a freshman, he helped the team qualify for the state playoffs.

Canfield enrolled at Cincinnati in 2004, spending his first season as a member of the scout team. In 2005, he appeared in eight contests. He was one of four players to man the right guard position that year, starting three contests. As a starter, he posted 19 knockdowns that included three touchdown-resulting blocks.

As a sophomore, Canfield took over right offensive guard duties after the season opener, starting the final 12 games. He received All-Big East Conference second-team honors, as he delivered an 82.25 percent grade for blocking consistency. He registered 84 knockdowns with nine touchdown-resulting blocks and also recovered one fumble.

In 2007, Canfield again was named All-Big East Conference second-team. Despite a midseason left knee sprain that saw him miss most of the Louisville contest, he paced the Bearcats with 100 knockdowns, delivering 12 touchdown-resulting blocks in the process. While the front wall allowed 23 sacks, just two were credited to Canfield. He started the first nine games on the right side, but finished the season with four straight starts at left guard.

As a senior, Canfield's blocking consistency grade of 84.07 percent was the best among the Big East Conference offensive guards. He generated 97 key blocks/knockdowns that also included nine blocks down field and 13 touchdown-resulting blocks. He allowed just three sacks and one quarterback pressure on 472 pass plays.

Positives: Tall and strong, but also nimble for pass protection and in reaching linebackers at the second level. ... Plays mean, willing to destroy targets in space and keep them on the ground until the play is done. ... Gets down quickly to cut linemen, but can also get up and immediately find someone to hit. ... Sets quickly and anchors well in pass protection. Gets the shoulder of his defender to create the correct running lane. ... Hands come up into his man's jersey quickly and he can move the defender as desired. ... More than willing to help out his tackle with an outside pass rusher. ... Is versatile enough to possibly move outside.

Negatives: Not a power drive blocker, lacking the lower-body strength needed to move larger defensive tackles. ... Must improve his punch to knock tackles off their moves. ... Needs to find and lock onto defenders in the open and sustain those blocks more consistently. ... He should dominate safeties and linebackers in space. ... Does not keep his pads low enough in short-yardage situations, losing the leverage battle. ... Fails to recover quickly from overextending. ... Sometimes will get penalized when he plays with too much attitude.