As the dust settles from the circus that is NFL Draft weekend, the Arizona Cardinals added a total of 17 players, eight draft picks and nine undrafted free agents, to their franchise. The diverse group of players ranges from simply massive (6'7, 364) in Herman Johnson to merely tiny (5'7, 180) in LaRod Stephens-Howling. The group was pretty balanced with eight offensive players and nine defensive players with the University of Cincinnati being the only school with multiple players who joined the Cardinals. The defensive secondary got major infusion of young talent with as many as five defensive backs joining the ranks and on the offensive side of the ball the focus was on building depth on the interior of the offensive line. With 17 new bodies you'd have to think that the Cardinals addressed each and every need right?

Earlier in the off season ROTB as a whole identified the biggest needs for the Cardinals heading into the draft. After 194 votes the top needs were clearly evident with running back dominating the poll with 38% of the vote. Outside linebacker was a distant second with 18% of the vote and cornerback (granted this was before Bryant McFadden was added) took home the bronze with 12%. Offensive line, defensive tackle, defensive end and safety rounded out the poll with inside linebacker bringing up the rear with two percent. The tight end position wasn't included in poll although some argued that it should have been added. The addition of Bryant McFadden and the uncertain future of Karlos Dansby most likely would have swayed some of the votes if the poll had been revived shortly before the draft but I think we've got a solid starting point in identifying the needs of the Red Birds heading into draft weekend so lets take a look at how they did....

#1 Need - Running Back: After months of speculation and countless mocks, I think the Cardinals got exactly what they wanted when Beanie Wells fell into their laps. Wells was arguably the top draft and undeniably a top 15 talent. He's a unique blend of size (6'1, 235) and speed (sub 4.5 forty) and the kind of franchise, workhorse back that Ken Whisenhunt and Russ Grimm love to build an offense around. Whether or not he's the day one starter at running, he should lead the Cardinals in carries and yards by seasons end. With the franchise back in place, the Cardinals waited until the seventh round to find their second back. LaRod Stephens-Howling was an unknown to just about everyone outside of the Pittsburgh Panthers but he's got the potential to be solid kick returner and maybe even a dangerous third down, scat back.

#2 Need - Outside Linebacker: To fill the second biggest need, the Cardinals used their second round pick to nab the best outside linebacker prospect on the board in Cody Brown. Brown was a collegiate defensive end but he's got the size and athleticism to excel as an outside linebacker. It may take a full season for Brown to fully grasp the position change but he should be able to contribute immediately on special teams and as a situational pass rusher. With Okeafor and Berry both likely on the way out after this season, Brown should become a starter in 2010. The Cardinals didn't stop there though because they nabbed another OLB prospect In the sixth round when they selected Will Davis. Davis is intriguing because he's actually a more natural pass rusher than Brown but his game is raw so the learning curve will be greater. It's possible that Davis will end up on the practice squad in 2009 but his ability to rush the passer is unique and with a full season refining his game and learning the position of OLB, he could be a force in a couple seasons.

#3 Need - Secondary Depth: Ok so I took some liberties and lumped corner and safety together but with the addition of Bryant McFadden, I suspect that corner back wouldn't have received near as many votes. With the depth of entire secondary a bit suspect, the Cardinals added a total of five potential players to the mix, including a third and fourth round pick. Third round pick, Rashad Johnson figures to push Aaron Francisco, Keith Lewis and Matt Ware down the depth chart and upgrade the secondary position. He's an intelligent, hard working safety who excels at reading 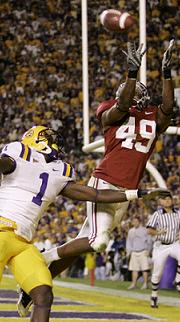 the action in front of him and keeping the play in front of him. He's not an exceptional athlete but neither is any of the trio that he's replacing. To bolster the depth at corner, the Cardinals made a surprising pick of Greg Toler in the fourth. Toler is a from a tiny school and took an unusual path to the NFL but his physical skills and ball hawking tendencies are undeniable. His overall game is raw but the depth ahead of him should allow him to grow at his own pace. The Cardinals added another two guys who have experience to play either safety or corner in the UDFA stages to provide competition in camp.

#5 Need - Offensive Line: For the past several months there has been countless discuss here and all over the net about the Cardinals offensive line. Who should be replaced, why couldn't they run the ball and countless others but in the end the coaching staff said multiple times that they were happy with the starting five and nothing that they did on draft day would suggest other wise. They did draft two offensive lineman in Herman Johnson (5th round) and Trevor Canfield (7th round) as well as adding another two prospects as undrafted players. Johnson and Canfield should improve the depth and provide competition on the interior of the line but neither should make serious push for starting time this season.

#4 Need - Defensive Line: Again I'm lumping two positions together with defensive end and tackle. The Cardinals didn't address either position in the draft or with a UDFA but that's not necessarily a bad thing. The starters across the defensive front are set and appear to be fairly solid with Darnell Dockett, Gabe Watson and Calais Campbell. The depth is what has some people worried but the coaching staff obviously feels comfortable with Bryan Robinson, Alan Branch, Kenny Iwebema and maybe even Keilen Dykes.

Despite being the NFC Champions (it sounded nice to hear that during the draft didn't it?) the Arizona Cardinals had plenty of needs heading into the draft but did they fill every one?