Share All sharing options for: Picking Up the Pieces After the Arizona Cardinals Cut Three Key Veterans

As Andrew reported, the Arizona Cardinals parted ways with three key veterans yesterday afternoon who had combined to start 33 games for the Cardinals last year and 81 games overall during their time in the desert. Edgerrin James has been anxiously awaiting his release since the Super Bowl ended so his release wasn't a surprise to anyone, but the same can not be said for Travis LaBoy and Roderick Hood. The Cardinals basically got caught in a numbers game after drafting two outside linebackers, a safety and a corner back, but the salaries of LaBoy and Hood also played a smaller role. In an clear reminder that today's NFL is still driven by balance sheets and income statements, we take a look at what each player's departure means to the Cardinals and his position.

Over the next week or so we'll take a look back at each players' time with the Cardinals and remember their best games. It's also worth remembering that we're talking about the team's biggest off season acquisition for each of the past three seasons (Edge in '06, Hood in '07 and LaBoy in '08), but for now here's a quick look at the thought process behind each cut.

Edgerrin James: James is the easy guy to analyze because we've all known that this day would come for nearly three months. Edge didn't want to come back and, at his price, the Cardinals didn't necessarily want him back either. Cutting him saved the Cardinals about $5 million in cap space.

Roderick Hood: In hindsight maybe we should have seen this coming, the Cardinals have added three corner backs over the past twelve months including two draft picks and one free agent signing. Hood, who signed a five year deal worth $15 million before the 2007 season, had started 30 games over the past two seasons and led the team with 35 passes defended and six interceptions over that period of time. As recent as early last season he was considered the team's best corner but with the emergence of DRC and the signing of Bryant McFadden, Hood's future as a starter was in jeopardy, if not completely taken away. His departure solidifies McFadden's starting role and leaves Ralph Brown and recent fourth round pick Greg Toler as the the primary backups although second year corner Michael Adams and free safety Antrel Rolle could also play a role in the battle for nickel or dime corner. Ultimately Hood's release saves the Cardinals about two million against the cap in 2009 but you've got to wonder if another team wouldn't have given up something for a decent corner with starting experience, even if the return was as small as a late round pick next year.

Travis LaBoy: LaBoy has endured quite a bit in the past 12 months. This time last year he was the prized acquisition (five year deal worth $22 million) of the Cardinals and he quickly won the starting job during training camp. In the season opener he recorded two sacks and a forced fumble and he followed that up with two more sacks in the fifth game of the season. During the bye week last year everyone at ROTB jumped on the LaBoy bandwagon and we even went as far to say: 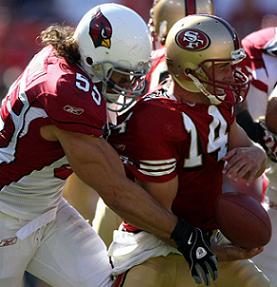 growing in his position and in this new defense. His most productive games should still be ahead of him and as he grows more comfortable he might very well end up being one of the better pass rushers in the NFC.

I think it goes without saying that we're feeling a bit foolish today. Almost as soon as the ink dried on that statement, LaBoy became virtually invisible on the field and could only be found in the training room. After 20 tackles and four sacks in the first six games he'd go on to record just 13 tackles and zero sacks for the rest of the season, including the playoffs. He struggled with various injuries and ended the season as arguably the most disappointing member of the 2008 squad, but that doesn't mean that his release isn't a a surprise. The Cardinals certainly have depth at outside linebacker after drafting two prospects this past weekend, but having three older veterans, all three of which are have a history or injuries, and two completely unproven rookies doesn't seem to inspire much confidence. When you add in the fact that it actually cost the Cardinals money and hurt the salary cap to cut LaBoy, you've got to wonder if there is more to the story. What makes this move even less puzzling is that the Cardinals had already paid out a $1.5 million roster bonus this year to LaBoy. In the end the cap room that it cost to cut LaBoy nearly canceled out the room that they freed up by cutting Hood.

It's become a common place in today's NFL for veterans to become salary cap casualties and the Cardinals cleaned up some of their veteran presence yesterday when they parted ways with Edgerrin James, Roderick Hood and Travis LaBoy. In total the net effect of the three moves leaves the team roughly $6.7 million under the cap and there is some hope that the free room will be used to extend some combination of Adrian Wilson, Anquan Boldin or Karlos Dansby. How do you feel about the cuts? Are there other players that you'd have rather released and are there any other cuts that should be made?