Darren Urban spends his days covering all things Arizona Cardinals related, so who better to ask about several different aspects of the franchise. For those who don't know, Urban operates and maintains the teams' official site and is responsible for everything from breaking news stories, blog entries and videos. Make sure to check it out to scratch your Cardinals itch, but for now check out Urban's answers our questions about the Cardinals draft needs, an Anquan Boldin update, this year's Steve Breaston candidate and much more....

ROTB - At the beginning of the off season there was some concern that the Cardinals roster would experience some significant turnover just like they did the last time that they made the playoffs. Instead though they not only retained their own, with the obvious exception of Antonio Smith, they also made a somewhat significant free agent splash when they signed Bryant McFadden. Adding a potential starting corner coupled with a several smaller signings (Lewis, Wright and Becht among others) signifies a step towards long term success instead of just a one year fluke, but how would you grade the Cardinals off season thus far?

Darren Urban - Ah, Charles, you should know better than to ask me to give a tangible grade. For one, I've never been a big fan of such things. Besides, if I did think it was an "F" (which I don't), I'm not going to be so negative publicly. (And I would have felt the same working for a newspaper). You can't know for sure until the season comes, obviously. I do like the idea of spending money on your own stars rather than chasing others. History shows that for the most part, the "big-name" free agents are almost never worth it. Some guys are very good players, for example, Albert Haynesworth. But the very top guys aren't getting to free agency. Even a Haynesworth has significant flaws, otherwise the Titans would have busted their butts to get him re-signed. Keep the stars you know intimately. You know if they are worth the money. I like the McFadden signing a lot and like the Cards' defensive backfield right now. They needed Warner back, and they got him. The bottom line - they don't tilt the roster out of whack by bringing in guys who are stars, and that rewards the main guys here. Besides, this was a division winner/Super Bowl runner-up. There is something to be said for continuity in that situation.

ROTB - With the recent signings the Cardinals are awful close to filling out the roster, if they're not already there before the draft. How have the signing effected the needs of this team and how would you rank our current needs? And just for good measure, care to take a stab at the first round pick?

Darren Urban - The latter first. As I have written and will continue to write, my best guesstimate for the first round is a running back or a pass rusher/linebacker. I'm not going out on a limb there. It will depend how the round shakes out. I like the Becht signing to forestall tight end issues (I still believe the Cards can find a decent TE rotation with what they already have, knowing the receivers they have and assuming health). McFadden probably means the Cards don't have to draft a corner. Needs, in my opinion, are 1) RB, 2) pass rusher (could be LB in a 3-4 set), 3) linebacker, 4) offensive line depth 5) perhaps inside defensive line, assuming Branch doesn't step up. Tight 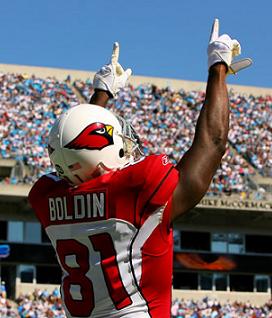 ROTB - Well I waited till the third question to ask about Anquan (is that a record or what). His grumblings seemed to have quieted down but it's obvious that the two sides still don't see eye to eye. Do you see any resolution (trade, extension etc) before the season or will this story line carry over to next off season?

Darren Urban - I can see basically every story line still having the possibility of existing. We could get to draft weekend and the trade speculation won't go away until the following Monday. If the Cards are blown away with an offer, they'd be dumb not to at least listen, although I still think Q stays. If Dansby and Wilson can get new deals, I think Q will get some talk, but again, he has two years left on his deal. I don't really want to think about Q coming to camp in the same spot, but I'm not ruling it out, either.

ROTB - Every off season starts the "what if" game and despite a Super Bowl berth, we've still spent some time speculating some position changes. The most popular 'what if' game involves shuffling players on the line, especially Levi Brown and or Mike Gandy. Both players look like they're better suited for guards at times (Gandy played guard quite bit before coming to AZ), but there obviously isn't anyone who can step in and play offensive tackle if they shuffle inside. There are also some who speculate that the defense would be better suited shifting Dansby to OLB and drafting an ILB instead of trying to find an OLB this season. Do you see any such 'shuffling' or 'experimenting' in OTA's or training camp?

Darren Urban - There is always some experimenting in the offseason. That only makes sense. As far as your specific examples, though, I don't see it, at least without knowing what the draft brings. DC Bill Davis loves Dansby in his current role and how Dansby can affect the play (even if it doesn't necessarily always show up on the stat sheet). Dansby isn't moving. Gandy, I thought (as did the Cards), had a very solid year in 2008, much better than I expected. His Super Bowl was not good, but those Steelers rushers made a lot of tackles look poor. Other than that, Gandy played well. I understand more is expected from Levi, but he's a first-round pick getting paid a lot of money and he will continue to be a tackle.

ROTB - Steve Breaston exploded onto the national scene last year after a very little contribution as a receiver his rookie season. Several names are brought up from time to time as 2009's breakout player including Calais Campbell, Brandon Keith, Gabe Watson, Elliot Vallejo or even Travis LaBoy (if he's healthy). Who is your 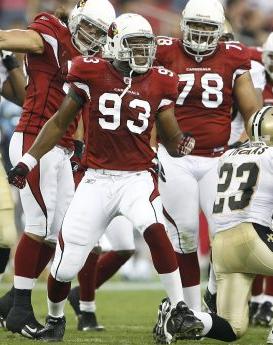 Darren Urban - Wouldn't it be great if it was Alan Branch? No, I don't expect that, but Branch would be the guy the Cards I think would most benefit from a breakout. Realistically, it's easy to look at Campbell, who is seriously motivated to be great and, as of now, has a starting job staring him in the face. He has the right work ethic. Now he just needs to show it on the field.

ROTB - One last question that I'm sure you've answered about a million times since Warner re-signed. What do the Cardinals do in 2010 if Warner gets hurt at some point during the 2009 season and Matt Leinart steps in and performs at or near the same level as old Grey Beard?

Darren Urban - I think that falls under crossing-that-bridge-when-we-come-to-it scenario. I think the Cards, who still can't be 100 percent sure of Leinart, would be thrilled in that situation because it meant the quarterback of the future problem was cemented as solved. It will depend on how much Warner was hurt, etc. Would I rule out Warner losing his job because of injury? No. One thing to remember though - what does it mean to you that Leinart "performs at or near the same level" as Warner? Because Leinart is not going to put up a near-5,000 yard season or 30 touchdowns. That's not his game and if he plays the offense is going to change. Now, if Leinart plays well and the team wins, to me, that's the same level - not necessarily because he's matched Kurt yard for yard. (And as a postscript, that doesn't mean I am a Warner hater or that I think Leinart should replace him. Warner was unreal last season and is clearly the better choice. But the transition is coming at the latest in two years, and if Warner gets seriously hurt, it may come sooner than that. That's why Warner was so desperate to make sure the second year of his deal wasn't so easily disposable - because he too knows what's up).

Darren Urban - 1) Edge is cut after the draft, 2) Edge returns, 3) Edge is cut before the draft. My percentage of Edge returning, and again, this is my guess and not because of any inside info, would be about 5 percent. If a running back isn't taken in the first two rounds of the draft, my percentage would grow maybe as high as 40 to 50 percent. I still find it doubtful Edge is here next season, but like any good bet-hedger, I will never say never.