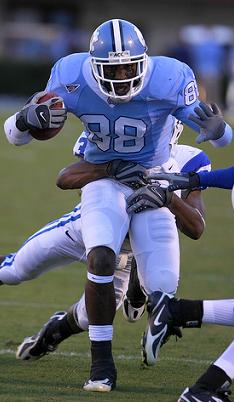 pick and nothing has changed in this scenario other than they've got two guys to chose from. They need a young WR to pair with Joe Flacco and Nicks and Percy Harvin are both worthy choices. Hicks gets the nod though because the Ravens don't get cute on offense and Harvin's the definition of that. Nicks could realistically step in and be a player very similar to Derrick Mason (current leading receiver) in a year or two. Mason's been a remarkably durable receiver, missing just one game since becoming a Raven, but he recently turned 35 years old and he's clearly headed down hill. Hicks comes out of North Carolina where he's been a three year starter and holds the school's record for receptions, yards and touchdowns in a career and in a single season.

With the loss of Bart Scott, the uncertainty of Terrell Suggs and the age of Ray Lewis, the possibility of selecting a linebacker does exist but with most of the top backers (all three USC grads and Laurinaitis) off the board, wide receiver takes center stage.

Positives: Nicks has good size and has enough upper body strength to defeat most press coverage. He's a very precise route runner with hands to make the difficult catch and he's fearless enough to make his living over the middle of the field. He's got good body control and leaping ability when the ball is in the air and he's shown good instincts after the catch. He's as solid off the field as he is on the field with great team attitude and competitive nature.

Negatives: Speed, or a lack thereof, is the biggest concern (although he quieted some by running a 4.51 at his pro day). He's not overly quick or explosive and can have problems separating at times. While he's got good instincts with the ball in his hands, he's not really elusive or tough to bring down. Blocking is another area of concern because he didn't do much of it in college and scouts are torn between a lack of ability or lack of desire in this area.

The Colts and Irishcardinal are now on the clock (e-mail to revengeofthebirds@gmail.com), with the Eagles and AJBirdWatcher on deck. If anyone needs to refresh their memory on the draft order, check here.