The Colts haven't used a first day pick on a defensive tackle since 2002 and throughout the past several seasons they've used Booger McFarland, Corey Simon, Ed Johnson and Antonio Johnson but none has produced sustained 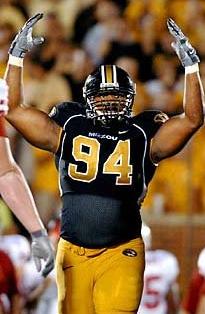 success. The result has been a run defense that's consistently been in the bottom half of the NFL over the past four seasons. If the season started today the Colts two starting tackles would be Keyunta Dawson (a 254 pound, 7th round pick from 2007) and Eric Foster (a 265 pound undrafted free agent in 2008). Needless to say that's an awful small defensive line that most likely wouldn't hold thier own against division rivals Tennessee and Jacksonville who love to run the ball. The answer to the Colts defensive tackles woes goes by the name 'Ziggy.'

Strengths: Hood's got good size and strength to compliment a non-stop motor. He's a natural athlete with good speed for his size and an explosive first step. He uses to hands well to defeat blockers and shows good lateral quickness to chase plays down the line of scrimmage. Above average instincts allow him to recognize plays quickly and blow up plays in the backfield before they get started.

Weaknesses: Hood's biggest problem is that he can play 'tall' at times and when he does he loses leverage and can neutralized rather quickly. He's also kind of stuck in the middle because he doesn't excel at any one thing, but he does just about everything well. Despite being a three year starter and improving every year he's never really produced 'eye-popping' production or dominating.

Many thanks to Irishcardinal for submitting this pick. The Eagles and AJBirdWatcher are now on the clock (e-mail to revengeofthebirds@gmail.com), with the Giants and ianbbc02 on deck. If anyone needs to refresh their memory on the draft order, check here.