Share All sharing options for: Clark Haggans Will Be a Starting OLB for the Arizona Cardinals This Season

When the Arizona Cardinals signed Clark Haggans to a three year contract earlier this off season, we were a bit surprised by the length of the contract considering Haggans' age. Well their master plan is starting to become more clear. Darren Urban reported yesterday that the defense will look more like a traditional 3-4 this year with the outside linebackers assuming more well rounded roles. In Clancy Pendergast's hybrid defense, one OLB would be primarily responsible for dropping into coverage (think Chike Okeafor) and the other OLB/DE would be primarily a pass rusher (think Bertrand Berry and Travis LaBoy), but that will no longer be the case. Under new defensive coordinator, Bill Davis, the Cardinals outside linebackers will look and act much more like the linebackers of traditional 3-4 squads like the Steelers and Patriots.

That wasn't the only news nugget that Urban had though as he also said that Clark Haggans will be the starter opposite of Chike Okeafor. Haggans has plenty of experience in the traditional 3-4 (61 starts with the Steelers) and that's a big reason why Ken Whisenhunt wanted to bring him him as a free agent last season, but Haggans didn't play much with the regular defense last year though and it'll be interesting to see how he responds with a return to the starting lineup. One thing worth watching though will be how Haggans (32 years old) and Okeafor (33 years old) hold up over the course of a full season as starters. Are you concerned with Haggans and Okeafor as starters or is this a good sign that we're moving to a traditional 3-4 defense? Does this also put more pressure on Cody Brown, who would presumably be the top backup on both sides? 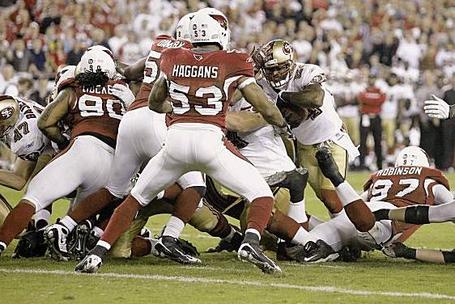 Maybe we'll see more plays like this goal line stand against the Niners.