Are Arizona Cardinals About to Add Carlton Medder and Dominique Byrd?

Share All sharing options for: Are Arizona Cardinals About to Add Carlton Medder and Dominique Byrd?

So far this off season, just when we think the Arizona Cardinals roster is just about set for training camp they make some kind of roster move and they looks like on the verge of adding two more players. According to Darren Urban, the Cardinals would like to bring back Carlton Medder, an undrafted free agent last year who injured his elbow during training camp. They're also going to invite  tight end Dominique Byrd, a former third round pick in 2006 of the St Louis Rams, to this weekend's mini camp. Niether of these moves have been made as of yet, but you'd have to think that they are close considering Urban mentioned them on the team's official site. The Cardinals currently have 82 guys on their roster (only 80 can go to camp) but until the drafted rookies sign their contracts, they do not count against  the '80' so these guys can be added without cutting anyone. Here's a quick look at each player:

Carlton Medder: Medder never got much of a chance last year because he injured his elbow very early in training camp. At the time the 6'5", 319 pound guard was working with the second team behind Reggie Wells. Medder was a three year starter at tackle for the Florida Gators but most scouts thought he'd have to move inside at the NFL level. At most Medder would be fighting for a spot on the practice squad but with 12 offensive lineman already on the roster.

Dominique Byrd: To say that Byrd was a disapointment in St Louis would probably be a massive 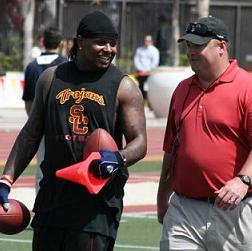 understatement. He never started a game and lasted just two seasons (appearing in 14 games) where he recorded just six receptions. Byrd caught the eye of the Cardinals when he worked out at USC's pro day earlier this month and GM Michael Bidwell and tight ends coach Freddie Kitchens spent some time talking to the 25 year old. Kitchens also spent some time running Byrd through some drills after the pro day was over so this might be a move that the Cardinals expected to make if they didn't land a tight end in the draft. During his time at USC, Byrd (6'2 254) was known as a very good receiving tight end who could stretch the field vertically but struggled to stay healthy (at least he sounds like a Cardinals tight end).

These moves, if they are made, probably won't effect the roster although the possible addition of Byrd is puzzling. The Cardinals already have too many tight ends and Byrd is not eligible for the practice squad. This could just be a case of spit-balling to try and find something that works or it could be yet another sign that the coaching staff has very little faith in the five-some of Leonard Pope, Ben Patrick, Stephen Spach, Anthony Becht and Alex Shor. Will either of these moves effect the eventual 53 man roster? Anyone interested in either guy?