Before we move onto other positions, congrats to Ottis Anderson for taking a comanding lead for the All-time running backs. He and Charlie Trippi will be added as the running backs on the All-Cardinal team. In the process of presenting the Cardinals' All-time Running Backs (think "halfback") a number of great players were believed to be errors of omission for not being included in that article. Those players would find their way to the RotB All-Cardinal Team: Fullbacks vote. With the decline of terms such as "tailback" and "halfback" and fullbacks becoming little more than blockers it's easy to forget that fullbacks once had a prominent part of a football team's offensive schemes. Do the names Larry Csonka, Franco Harris, and Jim Brown ring a bell? Fullbacks, all of them and the Cardinals have some great fullbacks of their own, m 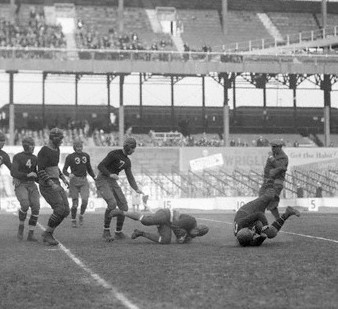 any from those "old-school" days and even from more recent Cardinals history.

Ernie Nevers has been described by some as the greatest football athlete ever. In fact, his college coach (none other than "Pop" Warner at Stanford University) claims that he was better than Jim Thorpe as he "had all of Thorpe's talent but tried harder". Nevers was a multi-sport star, playing professional basketball and baseball (gave up two of Babe Ruth's 60 homeruns during the 1927 season) before the Duluth Eskimos lured him to the NFL with a then record $15,000 annual salary. He was the epitome of "ironman" missing all of 27 minutes of the Eskimos' 1926 season, a season that included 29 games, 28 of which were on the road. Nevers joined the Chicago Cardinals in 1929 and still holds the NFL record for most points scored in a game with 40 points against the Chicago Bears that first season (six touchdowns and four extra points), a record that has lasted 80 years and will likely never be broken. Nevers played fullback and was the headcoach in his final two years with Chicago before wear and tear finally caught up with him. He may have played only five years in the league but his talent was so amazing he had no problem entering the Hall of Fame in the 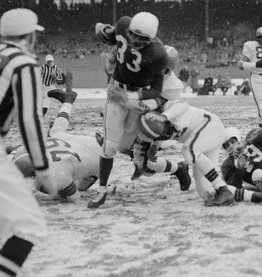 Ollie Matson was the lone bright spot for the 1950's Chicago Cardinals (28-58-3 during his tenure with one winning season in '56). Originally drafted as a fullback and earning Rookie of the Year honours in 1952 in that capacity (had two INTs on defense too!), Matson was better known as playing as a left-winger (halfback) in the T-formation. Matson was also a beast with the return game, averaging 28.5 yards on kick-offs and 10.9 yards on punt returns. The former #1 overall pick was traded to the Rams for nine players after the '58 season (Bidwell Curse: '59 team finished a half-game worse at 2-10 then moved to St. Louis) and played for eight more seasons.

Jim Otis started his career with the Saints and Chiefs before finding a home in St. Louis. Up to this point he was considered a "bust" and was expected to little more than support for Donny Anderson and Terry Metcalf. Instead, Otis lead the Cardinals in rushing in perhaps their second best regular season peformance of 11-3 while helping Metcalf to 816 yards. Otis continued to be a solid fullback for the Cardinals through 1978, gaining 664 yards in his last season before Wayne Morris took over. 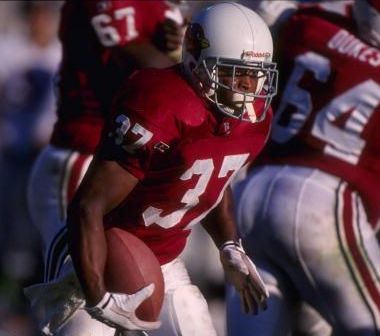 Larry Centers was the face of the franchise, at least on offense, of the Cardinals in the '90's as the team attempted to find success in the Valley of the Sun. Centers wasn't a threat to run the ball but was a major weapon on third downs when the pressure came and the QB had to dump it off. Centers kept the chains moving and kept the fans cheering for a score, part of his allure to Arizona fans over the years. He had back-to-back 1,000 yards from scrimmage years in '95 and '96 (Pro Bowl years) with career highs in receiving yards (962 yards in '95) and rushing (425 yards in '96). Centers finally tasted success with the Plummer-led '98 team but was one of many lost in the '99 roster purge. After stops in Washington and Buffalo, Centers earned a championship ring with the New England Patriots in '03.