As mentioned during the Eagles previous pick at 21, offensive tackle is a 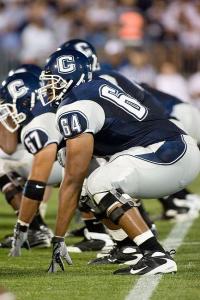 primary need with 2008 starter Tra Thomas signing a 3 year deal with Jacksonville. Beatty, typically rated as the 5th or 6th best tackle on most draft boards, fills a glaring need for Philadelphia and is not too far of a reach for the 28th overall pick.

Positives: Beatty's got good length and has an ideal frame. Great athleticism paired with quick, agile feet have helped him become an excellent pass protector. He has good lateral quickness and his mobile enough to pull and get to the second level. Three years of starting experience combined with a great character provide Beatty with solid intangibles.

Negatives: Beatty's a finesse blocker who excels in pass protection but isn't overly aggressive or punishing in the run game. He needs to get stronger and could be more effective if he added 20 pounds of bulk. His lack of great size leaves him suseptible to bull rushes from larger defenders.

Many thanks to AJBirdWatcher for submitting this pick. The Giants and ianbbc02 are now on the clock (e-mail to revengeofthebirds@gmail.com), with the Titans and Giannaros on deck. If anyone needs to refresh their memory on the draft order, check here.