The Titans biggest need can be found at the corner backs position, as Nick Harper is getting really old (turns 35 next season) 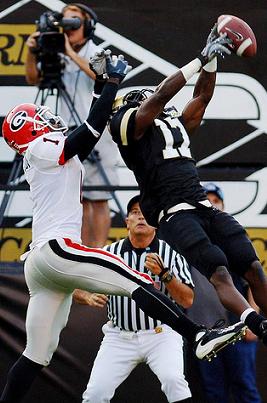 and the depth isn't really the best. Moore doesn't have the ideal size for the position, and he didn't really impress at the combine, but he is a very quick athlete who understands well coverages and techniques. He is a winner, and if he works on his strength, he might become an elite corner back.

Positives: Moore's an elite athlete with good speed, agility and smooth, fluid hips. He's got terrific hands and ball skills to compliment outstanding instincts. Twelve picks over the past two seasons proves his reputation as a ball hawk capable of baiting quarterbacks. He's also extremely dangerous with the ball in his hands and played some offense at Vandy with also being a dangerous return man.

Negatives: Size is obviously Moore's biggest weakness as he'll struggle against big receivers and isn't very effective when jamming receivers. He  isn't the best tackler, even for his size, and does have trouble getting off blocks. His aggressive style can also hurt him at times as he's suseptible to double moves.

Many thanks to Giannaros for submitting this pick. Our very own Cardinals and the ROTB community are now on the clock so check back first thing in the morning for ROTB's selection. The  Steelers and Blitzburgh on deck. If anyone needs to refresh their memory on the draft order, check here.