Arizona Cardinals vs. Karlos Dansby: Will this Battle Effect the Draft?

Share All sharing options for: Arizona Cardinals vs. Karlos Dansby: Will this Battle Effect the Draft?

At the end of last week we were slipped the hope that the Arizona Cardinals and franchised-linebacker Karlos Dansby were making progress towards a new deal, but just as Red warned up in Shawshank, hope isn't always a good thing:

"Let me tell you something my friend. Hope is a dangerous thing. Hope can drive a man insane." 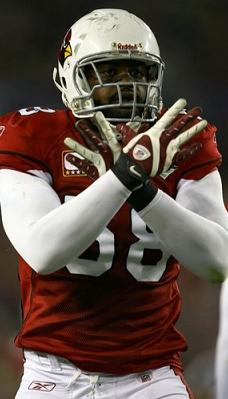 As the week as has unfolded, we've learned that Dansby fired his agent over the weekend and he has doubts that a long term deal will be negotiated. He's gone on to say that the two sides were never close to getting a deal done and has mentioned that he's looking forward to making a 'splash' in free agency next year:

"It's an uncapped year next year and I'm mentioned among the better linebackers in the league as far as the guys who are going to be up next year also," Dansby said. "So why not show what I've got? I'm up for the challenge. Make a splash, man."

So where does that leave the Cardinals and what options do they have?

As with most scenerios in this league there doesn't seem to be an easy answer. It's still possible that the two sides could reach a long term deal, although if I'm the Cardinals I wouldn't hold my breath on any 'hometown discounts.' Obviously Dansby will have to hire a new agent before the two sides can resume talks so it's probably fair to say that a deal won't be reached before the draft. It's also possible (notice I said possible and not probable or certainly not likely) that the Cardinals could trade Dansby. It's rare that 'franchised' players are tagged, Matt Cassel not with standing, but unless the Cardinals could secure another linebacker or a pick in which they could draft a backer who could start as a rookie in the trade, I highly doubt this is being considered among the Cardinals front office.

With all that being said, it's beginning to look like the Karlos Dansby will play the 2009 season under the tag for a second consecutive season and become a free agent next off season. Whether or not the NFL is uncapped or not in 2010, the Cardinals will be bidding for his services against every other team that is hungry for a very good linebacker. So does the uncertainty of Dansby's future change the Cardinals draft plans in 2009?

Since I'm sure someone is thinking, "wait, wait, wait....Can't we just tag him for a third consecutive season?"

That's just a taste of some of the guys who could fill a Dansby void in 2010 but we may be getting ahead of ourselves. Do you think Dansby will resign either this year or next year? Does the possibility of an uncapped season help or hurt the Cardinals chances?