Ok, so I knew we said we were going to let the poll go for 24 hours (and if you didn't get a chance to vote, you still can) but it looks like the majority has spoken and the Arizona Cardinals masses have selected... 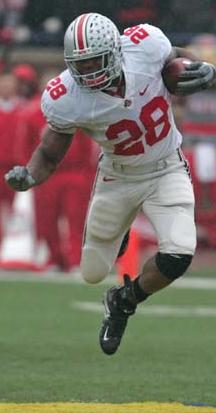 the "we need a running back" horse to death. Here's what we had to say about Wells a couple of weeks ago as a 'potential draft pick:'

Positives: Wells is your ideal, large downhill runner. He has the perfect size (Upper body, arms, legs, shoulders), and speed to be dominant runner in the NFL. He has great vision and is able to burst through holes at ease. He runs through tackles with a force, and carries defenders with him. Once in the second level, he becomes even harder to bring down. He usually wins a challenge, and adds extra yardage after the first hit. Arm and leg tackles rarely bring him down. Most defenders have trouble with him because of his speed and elusiveness as well. Although he is a bull runner, he can hit the burners in the secondary, and makes more then one cut at a time. Wells is also a smart, patient player, who will adjust to new plays and formations. Wells has good leg drive, and has the best stiff arm in the draft.

Many thanks to everyone who voted and voiced their opinion. The Steelers and Blitzburgh are now on the clock with the Lions and Andrew602 on deck. If anyone needs to refresh their memory on the second round draft order, check here.