Before we get to the next position, I think it's safe to say that Larry Centers won the full back spot on our all-Cardinal team. Many thanks to all that voted for him. The next position up is offensive lineman. The Cardinals have had some great lineman in the past, but not so many recently. And maybe not so much to do a valid pole. So the locks so far on the team start with the obvious, Dan Dierdorf. He will be named the as the 1st starting tackle. We also felt that Conrad Dobler should be named as one of starting guards. Ernie McMillan gets the other tackle spot, along with Ken Gray getting the other guard. The center position could either go to Tom Banks or 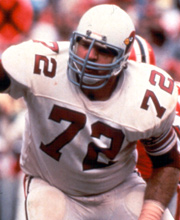 Bob DeMarco. So what we've decided to do here is make Dierdorf, Dobler, McMillin, and Gray as locks for the O-line, and the center position will be up for grabs.

Deirdorf was a second round pick by the St. Louis Cardinals in 1971. He started his career at left tackle and guard before solidifying the right tackle position for the next 8 years. He spent a total of 13 seasons as part of the St. Louis Cardinals and played in 160 games. For the 1976 and 1977 seasons, Dierdorf manned a streak in which he didn't allow any sacks, and was part of an offensive line that only gave up 8 sacks in 1975 (which was the record at the time). Deirdorf went on to play center towards the end of his illustrious career. He will be remembered as possibly the greatest Cardinals offensive lineman of all time and that's why he's in the Hall of Fame.

McMillan, the other tackle, didn't get drafted until the 13th round out of Illinois, but that didn't stop him from playing in the NFL for 14 seasons and playing in over 170 games, 162 consecutively. He was elected to four Pro Bowls and two All-Pro teams. The St. Louis Cardinals enjoyed six winning seasons during McMillan's 14 years including a playoff appearance. The McMillan's are also quite a football family. His son and nephew have both played in the NFL. His son, Erik, is a two time Pro Bowler and 1988 Defensive Rookie of Year for the New York Jets. His nephew, Howard Richards, was a first round pick of the Dallas Cowboys in 1981.

Dobler was drafted by the St. Louis Cardinals in 1972 in the 5th round. He was a member of that great offensive line of the '70s. He was a constant force on the offensive line and his trash talking always had an affect on the defense. He's also 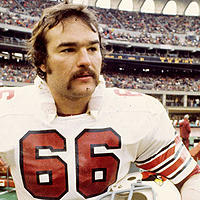 "Dobler didn't care who got hurt. He punched Mean Joe Greene, he kicked Merlin Olsen in the head, he bit, he gouged, and once, he spit on a downed and injured opponent, the Eagles' Bill Bradley."

Gray was a former 6th round pick of the 1958 draft. He played 11 seasons for the Cardinals until his last year in which he played for the Houston Oilers. In his time

as a Cardinal, he was elected to 6 Pro Bowls and was added as an All Pro 7 times. At his time he was a large dominant guard standing 6 feet tall, 2 inches and 245 pounds. Just look for yourself at the picture on the left. Big guy right? He was also one of the most durable lineman of his time playing in 161 games as a Cardinal.

Demarco can be considered one of the all time steals by the Cardinals as he was taken in the 14th round of the 1960 draft. Demarco later went on to play in 15 seasons for 4 different NFL teams. He played 9 of those seasons with the St. Louis Cardinals, playing in 107 games. He was selected to two 1st team All-Pro, and 5 1st team all-conference. Demarco was a rather large center at the time standing 6'2, 248 lbs.

Another late round steal at center was Tom Banks. He was taken in the 8th round, 189th overall in the 1971 draft by the St. Louis Cardinals. This means the Cardinals had 2 decades straight of pro bowl play at the center position. The 6'1, 245 center was also part of that formidable offensive line in 1975. He was selected to 4 pro bowls, one 1st team All-Pro, and three 1st team all conference teams.

Other then the center position, here is you All-Cardinals offensive line. The center spot will be announced next week to join them. Was there anybody left off of the list or anybody more worthy to be on the offensive line? If you feel another player deserved to be on the team, drop a comment with who and why. Leonard Davis anyone?