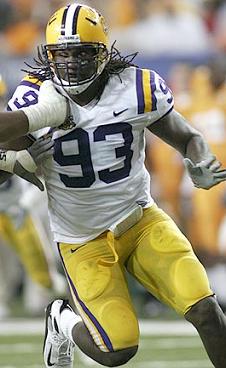 comes to a close? The physical DE out of LSU would have to be considered the Best Player Available at this point despite all the fine selections made earlier in the 1st Round.

In all actuality, it would be interesting if a scenario like this played out on Draft Day later this month. The common logic for the defending Super Bowl Champs heading into this draft is that they will select an Offensive Lineman with their 1st Round pick, and perhaps as with one of their other mid-round picks as well. The Steelers gave up an ungodly number of sacks for the 2nd year in a row (47 in '08, 46 in '07). So upgrading the unit that's in charge of protecting their $100+ million asset in Ben Roethlisberger is surely a priority at some point in this and in future years' drafts.

But by re-signing incumbent OL Max Starks and Chris Kemoeatu, the Steelers are still in position where they can draft the BPA if it's a no-brainer like this. It doesn't hurt that the DL is also an area worth addressing. All three starters in Pittsburgh's 3-4 - Brett Keisel, Casey Hampton, and Aaron Smith - are all over the age of 30. And in the case of Hampton and Keisel, both have expiring contracts at the end of the 2010 season. Getting an athletic, experienced and extremely physical DE like Jackson to work into the mix in 2009 and 2010 would let the Steelers feel a bit better about that area of need as they potentially seek to address the offensive line as well as the CB position in the immediate future.

Positives: Jackson's got the perfect size and bulk for a 3-4 defensive end. His long arms and excellent strength make him a solid run defender and an above average bull rusher. He's got a ton of experience against top flight competition and is a hard worker.

Negatives: Jackson doesn't have great timed speed and doesn't operate well in space. His motor is inconsistent at times and some scouts question his instincts. He's not much of a pass rush threat off the edge and won't ever rack up many sacks.

Many thanks to Blitzburgh for submitting this pick and supplying an excellent write-up. The Lions and Andrew602 are now on the clock with the Patriots and my wife on deck. If anyone needs to refresh their memory on the second round draft order, check here.