It's late but it's here. After a short break for the draft, ROTB can now return to finishing their all-Cardinal team. We last left off with the defensive ends, where Simeon Rice won the starting nod, along with Freddie Joe Nunn earning 2nd on the depth chart. It should also be noted that fan favorite, Bert Berry earned a well amount of votes so he does get honorable mentions here. We now move on to the interior part of the defensive line with the defensive tackles. As we've stated before, sacks weren't recorded as a stat till 1982 so it is difficult to measure a franchise leader on the defensive line. We did try our best to include the top nominees, and if you feel somebody should be added, drop a comment with who and why. 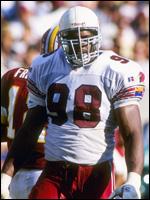 Swann played for the Cardinals from '91 to '99 and was a pro bowl & all pro during '95 & '96 season. He is the franchise leader in sacks from the defensive tackle position and is on the leader board for consecutive games with a sack at four (1995). Swann was the rare modern day NFL player who never attended college. He was drafted off of semi-pro team after not having the grades to attend North Carolina State, but that certainly didn't stop him from having one of the most prolific careers of any Arizona Cardinal player in franchise history. Knee problems ended his career at the age of 30 but Swannie, as recently as last year, is still trying to get back in the NFL. 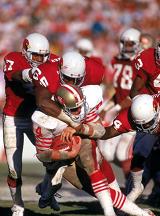 Played for the Cardinals from '82 to '89 and was a second round pick in the '82 draft. He has the second most sacks for a defensive tackle in Cardinals history (36) and his 12 sack season in 1983 still ranks as the best sack season for any defensive tackle in franchise history (and 8th overall). In that '83 season he also added a safety and a pick. After three injury plagued seasons (missed 24 games) Galloway was traded to the Denver Broncos after the '89 season and the next season in the NFL would be his last. He never lived up to the expectations that he made for himself after that great season in '83 but when he was healthy he was a force in the middle of the defensive line.

Walker played for the Cardinals from '64 to '72 and was voted to a pro bowl in '66, and was voted to the first team All-Pro in 1969. Walker could have easily been one of the first real run-stuffers as he stood 6'3 and weighed over 260 pounds in his time. He was also a more dependable defensive tackles as he played in 96 games as a Cardinal. Since sacks weren't recorded when he played, the only stat to track was that he recovered 15 fumbles in 9 years as a Cardinal, which does indicate that

he was consistently around the ball carrier.

Another defensive tackle during the sixties in Sam Silas, played for the Cardinals from '63 to '67 and was voted to a pro bowl in '65. Silas, just like Walker, was also a large clog in the middle weighing 255 pounds and standing 6'4 during his time. He was also a secure starter as he never missed a game during his tenure as a Cardinal. 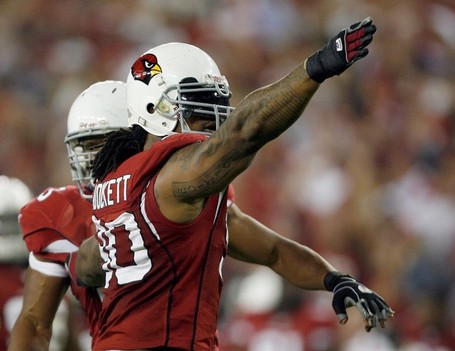 The final addition to the nominees is the current defensive tackle in Darnell Dockett. Although he's recently made news by requesting a trade, for the most part, he's been a favorite on the team, and a steal for being drafted in the 3rd round of the 2004 draft. We all know that Dockett can be unstoppable when he wants to be, evidence being in the Super Bowl as he single-handedly stopped a couple Steeler drives. He also tied a Super Bowl record with 3 sacks. Dockett can be a dominant defensive tackle at times, and is also underrated in his durability, as he's started 79 out of his 80 career games.

Who makes the cut on your All-Time team?