It didn't take long for the Arizona Cardinals 2008 draft class to show some promise last year. Despite selecting much later than they were accustomed to drafting, the Cardinals stayed patient and took the best player avaliable early on before filling some needs in the later rounds. The rookie class turned heads early and often during camp, preseason and the regular season, but what can we expect from them as an encore?

First, it's worth mentioning that at least two of the six remaining players are nearly guaranteed to win a starting job (DRC and CC) and Tim Hightower is a good bet to start his fair share of games as well. Brandon Keith could push for playing time this summer and Kenny Iwebema figures to be the top backup in the defensive line rotation. With so many sophomores contributing, what impact can they have on the 2009 Arizona Cardinals?

Dominique Rodgers-Cromartie: With the 16th overall pick, the Cardinals took the most physically gifted corner in the draft and it didn't take long to figure out that his skills would translate to the NFL game. We wondered how long it would take for him to step into the starting lineup and he didn't disappoint. After some early season struggles (BUF and DAL games), he stepped into the starting role by week nine and never looked back. By season's end he led the Card's defense in pass breakups and interceptions and it even looked like some teams were avoiding him in the passing game. To raise the bar even higher, DRC stepped up his game in the playoffs recording interceptions in each of the first two games, nine pass breakups overall and 20 tackles overall.

Calais Campbell: Campbell fell to the Cardinals' 50th overall pick after a disappointing junior season and less than impressive workouts, but it didn't take him long to prove that he was well worth the selection. He didn't get the opportunity to contribute much on the defensive side of the ball because both Darnell Dockett and Antonio Smith stayed healthy, but his blend of size and speed made him a terror on special teams. He finished the season with 28 tackles, on pass defended and one forced fumble.

Early Doucet: After being selected with the 81st overall pick, Doucet was supposed to be the front runner to win the third wide receiver job, but a hamstring limited him for a large part of training camp. By the time he returned to the field he was buried on the depth chart and was never able to regain any ground. Since he couldn't contribute much on special teams, he was stuck behind both Steve Breaston and Jerheme Urban on the depth chart and he was only active on for seven games (when Boldin didn't play). He finished the season with 14 receptions for 90 yards and he added another reception in the playoffs against the Panthers.

Kenny Iwebema: The Cards took Iwebema with the 116th overall pick and they had some inside knowledge because their defensive line coach, Ron Aiken, recruited and coached Iwebema at Iowa. He surprised some in camp with his strength and had an impressive preseason recording two sacks in three games. He got some early playing time at nose tackle, when both Gabe Watson and Alan Branch were sidelined with injuries, which is 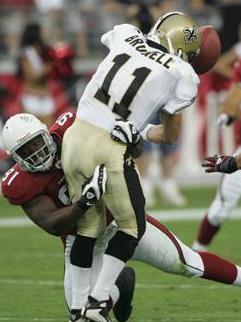 another testament to his strength. He finished the season with three tackles and added two more in the playoffs as well as a pass breakup.

Tim Hightower: No other rookie was as popular as Tim Hightower last summer after being the Cardinals' fifth round pick. He instantly drew comparisons to Marion Barber and Marcus Allen and his popularity seemed to be on a meteoric rise after recording three touchdowns in the preseason. Once the season started he didn't disappoint, recording five touchdowns in the first six games before being placed in the starting lineup. Some of the shine fell off of his star at the season wore on and the running game struggled but he still finished the season with 10 TDs and added another three touchdowns in the playoffs (including his first two receiving TD's).

Chris Harrington: Harrington was the Cardinals sixth round pick but he didn't last long with the team. He was attempting to make the transition from defensive end to outside linebacker and was cut after training camp but added to the practice squad shortly there after. The Bengals ended up plucking him off the practice squad in early December though and he appeared in three games for Cincy.

Brandon Keith: We knew very little about Keith when the Cardinals selected him in the seventh round, but by training camp we were somewhat excited about his future. Keith bounced around the college ranks but had some talent that needed to be harnessed. Considering the health of the offensive line thought he wasn't active for any game in 2008.

Overall the Cardinals 2008 draft class certainly looks like a promising group and could produce three or four starters in just their second season. Assuming that DRC is the most promising sophomore, who else are you expecting big year's from? Do you still have faith in Doucet and what does his future hold? Should Keith be in the starting lineup?