The Arizona Cardinals first attempt to shore up a secondary that gave up more passing TD's than any other team in the NFL came in the third round of the NFL draft when they called the name of Rashad Johnson. Johnson originally walked onto Alabama but ended up being a two year starter and one of the only two-time team captains in Bama history. He's been durable, only missing a couple of games in 2006, and extremely productive (183 tackles and 11 picks in the past two seasons). His former head coach, Nick Saban, has spoken very highly of him over the past couple of months and he won several award for his outstanding player after his senior season. Of course, Johnson 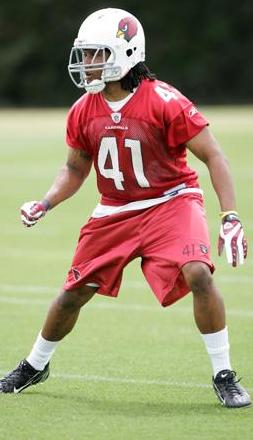 couldn't start his Cardinals career without talking with the best Cardinals blog on the net.....

ROTB - Rashad, you've got such a great story coming from a tiny 1-A high school, walking on at Alabama as a running back and eventually becoming a two time team captain and two year starter. Surely you didn't envision being such a highly rated prospect when you walked on at 'Bama but at what point did you start to realize that you had the skills to play on Sundays?

Rashad Johnson - I think it came once I got to the university because when I first got there it was a still a question of what position could I play with these guys. I didn't get an offer from any big schools so there was still a question mark up in the air. When I got here though, started getting on the field, doing things and seeing that I was as good as some of the guys who were big time players, I was able to make plays and compete with those guys. Once I started to playing, especially my junior year, and started making plays then it really opened my eyes to the fact that the NFL was a goal that I could reach.

ROTB - Moving from running back to free safety must have been a challenging move. Was that a move that you wanted to make or was it just an opening on the team that you filled?

RJ - It was more of an opening that I filled because I came in as a running back and I loved getting the ball in my hands and things like that, but once they came to me with the proposition of moving over and getting the opportunity to get on the field and play, I was excited about it. Before that I was getting much playing time, it was mostly special teams, but once I made the move over it worked out very well. It  wasn't a hard transition at all.

ROTB - While you were going through the pre-draft process I'm sure you visited various teams for private workouts and interviews. Did the Cardinals show a great deal of interest in you leading up to the draft and did you have a good idea that they were targeting you?

RJ - I really didn't know because I only took a visit to Denver and Philadelphia and the only contact I had with Arizona was at the combine. I sat down, had my meeting with them, talked with them and I thought the meeting went really well, but I really didn't know how interested they were. I didn't talk to them again until like three or four days before the draft because they called just to get some contact info and make sure that my numbers were still the same, but I didn't think anything about it because every team was doing that. When they finally called though I was excited about the situation that I was coming into because they're a great team, a program on the rise so I was happy to be a part of it.

ROTB - You've got quite a reputation as a ball hawking safety with a great work ethic and high football IQ. What do you feel are your biggest strengths and maybe one or two of your weaknesses?

RJ - I think my biggest strength, as a safety, are my instincts. I understand the game pretty well and the coverages that we play, including the weaknesses in them, kind of like a quarterback who pre-reads the defense. Also my range in the middle of the field as far as getting over the top and filling the run alleys. As far as my weaknesses, I'd say that in this league you just need to be bigger, stronger and faster. The players are a lot better up here so I just need to improve in all of those areas because these guys are stronger and faster. Another thing is bringing my legs with me when I tackle because I know when I was watching tape of last year I didn't do that as much as I would have liked.

ROTB - Also, do you think your experience as a running back has helped you as a safety when trying to read an offense or diagnose plays?

RJ - It does a little bit because when you're back there you see the same holes that a running back sees so you can kind of anticipate the cuts that he's going to make. That's pretty much what you do is fill a void, you know, when you see a gap open up you fill it and either make the play or send it to someone else.

ROTB - I noticed that you returned a couple of kickoffs during your time at Bama and you've obviously got some experience with the ball in your hands. Has the coaching staff of the Cardinals mentioned anything about trying you out as a kick or punt returner?

ROTB - The Cardinals seem to be set at the starting safety spots but there's a need for a nickel safety. Have you thought about your expectations for this year or has the coaching staff talked about expectations?

ROTB - Ok just one more question, who were your favorite team and players as a kid? Also once you moved to safety, was there a player that you tried to model your game after?

RJ - As a kid I was always a 49ers fan. With Morten Hanks, Deion Sanders and Ricky Watters there and that group of guys, I was big 49er fan. As I got older, I started liking more players as opposed to just being a fan and now that I'm a safety, I'm a huge Bob Sanders fan. Bob Sanders and Ed Reed are two guys that I make sure to watch when their games are on, especially Bob Sanders. He seems like he's giving it his all every single play, in the box and out of the box, he's always getting his name called for doing something. He's all over the field so I just like to watch him put forth the effort and put himself in a position to make plays.

We can't thank Rashad enough for taking the time and being quite forthcoming. Hopefully we'll all being cheering for #41 for a long time. Thoughts?