Share All sharing options for: The 2009 Arizona Cardinals Offensive Line

Over the last couple of decades, the Arizona Cardinals have rarely had a great offensive line. And for few years prior to '08, it's been a large area for concern. Things changed in 2008 though, as the Cardinals offensive line gelled for a second straight season. They were also fortunate enough to not receive many injuries or miss any games. There has been some speculation however, as to whether or not the Cardinals offensive line should be shuffled. Former first round pick Levi Brown struggled at times throughout the season, and other tackle Mike Gandy played poorly in the Super Bowl. Their starting center was an undrafted free agent. Deuce Lutui seemed to commit a penalty or bonehead play in every game till he cleaned up his ways.  It also doesn't help their case that the running game finished last in the league in '08. As you can see from the depth chart, the most obvious note is the return of the starting five. You can also see that depth has improved after the draft as the Cardinals have some solid lineman even at the 3rd string unit. There are some lineman that have the potential to be inserted into the starting line up as well. Lets take a look at the offensive line. 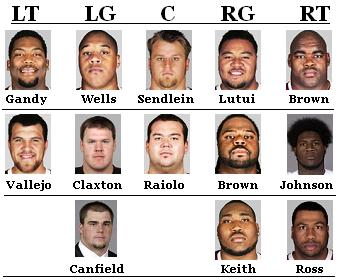 Keeping the Line the Same:
The Cardinals offensive line will be going into their 3rd year together, aside for Al Johnson being lost due to injuries. One of the key factors to any team's success is consistency. Keeping the line together another year would only improve their play. They played especially well towards the end of last season headed into the playoffs. To put it in perspective, the Cardinals line only gave up 28 sacks throughout the season, which was tied for 11th in the league with the Giants. They only allowed 5 sacks throughout the playoffs, 2 being in the Super Bowl. To put that in a better perspective, the offensive line gave up 1.75 sacks per game during the regular season, and 1.25 during the playoffs. One has to wonder if that same play and momentum through the playoffs, will continue on in 2009

There have been many opinions thrown around, especially here at ROTB as to whether or not the Cardinals should adjust the offensive line. This all started stemming after the Super Bowl. Many wondered if the Cardinals should have taken center, Alex Mack out of Cal, in the 1st round of the draft, which we broke down here and here. Others were frustrated with Mike Gandy's performance in the Super Bowl, as he was manhandled by James Harrison. Obviously a center wasn't drafted and there wasn't a significant pick up in free agency to replace Gandy. But that still doesn't stop the shuffle talk. One of the most common structures that I have seen was moving Levi Brown to guard. But how would this affect the rest of the line? Brown would likely take Wells place, as Lutui found his grove in the second half of the season. Putting Brown at guard would essentially help him utilize his skills in the running game, and avoid his weakness in pass protection. That move however, would leave a hole at tackle that would be tough to replace. Gandy could slide over to right tackle, and Wells could take the left tackle position. Wells has experience at tackle, but can he handle the speed of edge rushers? Another scenario out there is taking Gandy completely out of the equation, and inserting Hermon Johnson, Brandon Keith, or Elliot Vallejo. Johnson and Keith are massive lineman that could definitely improve the rushing game, but they're still young, overweight to play tackle, and may not have the speed for some defenses. Vallejo is also young but many want to see how he would handle the pressure of starting. Could we see this line up one day?

The Cardinals line will surely develop even more in '09 and we should see that improvement in their play. The coaching staff had enough confidence in Sendlein to keep him as our starting center, so we may see an improved Lyle as well this year. Although Brown struggled at times last year, he was still young and developing, and we can only hope that he has improved his technique. Wells and Lutui seem to be locks at guard as Wells is always consistent, and Lutui seemed to change his bonehead ways in the middle of last year. The final member and the dark horse of the line, Mike Gandy, showed at times last year that he was a solid tackle. If he's able to improve against speed rushers, then we may see fewer sacks given up by him. After looking at the line, there are certainly more pieces in the mix and a lot better depth then ever before. It seems as though you could insert any of the young players but how much of an improvement would it be over the current starters? Should the Cardinals continue adding pieces to the line or shuffling anybody around? What would your line up be if you shuffled the line?