Herman Johnson and His Future with the Arizona Cardinals

Share All sharing options for: Herman Johnson and His Future with the Arizona Cardinals

The Arizona Cardinals have struggled mightily to move the ball on the ground for several years and as you might expect, it's not the fault of any single player or position group. The running backs certainly haven't ripped up the combination but the offensive line hasn't exactly set the world afire either. Since Ken Whisenhunt and Russ Grimm came to Arizona, they've made a conscious effort to rebuild the offensive line. In two years (three drafts) they've drafted four lineman, signed two free agents and that's not even counting all of the undrafted free agents brought in (which includes starting center Lyle Sendlien). The newest addition to a crowded position group needs all the room that they can give him. In the fifth round the Cardinals called the name of Herman Johnson, a massive lineman (6'7 364) from LSU who figures to have the size and strength to help any running game. The Cardinals 'starting five' appears to be set, but what can we expect from Johnson in 2009 and beyond?

It's incredibly early in Johnson's career but the Cardinals have already made a surprising move in initially lining him up at right tackle, even though most scouts thought he was much better suited as a guard. Big Herm did play both guard and tackle while at LSU, but most of his experience came at left guard. The Cardinals coaching staff isn't making any definitive statements about his eventual home but simply said that he'll work at tackle and guard throughout training camp. Wherever he ends up playing though, he'll certainly be a physical presense.

What we can expect in 2009: Johnson's role in 2009 will depend greatly on the health and performance of the starting five. If Gandy, Wells, Sendlein, Lutui and Brown stay healthy for the entire season, Johnson's contributions will be severely limited and 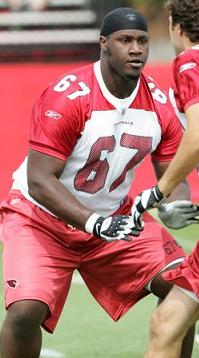 given the experienced depth around him (Vallejo, Keith and Brown), Johnson might not even be active on game days. Unless the line gets ravaged by injuries, Johnson's 2009 could be very much like Brandon Keith's 2008.

What we can expect in the future: Depsite his fifth round status, Johnson could realistically push for playing time in 2010, whether it be at guard or tackle. Mike Gandy, Deuce Lutui and Elton Brown will all be unrestricted free agents next off season and Lyle Sendlein, Elliot Vallejo, Ben Claxton and Donovan Raiola will all be restricted free agents, so the opportunity will be there to make an impression. It'll be up to Johnson to prove to can maintain his weight and learn as much as he can this season.

In order to get a better picture of the man that they call "House," we contacted the Richard Pittman from And The Valley Shook (SBNation's LSU blog) with questions about Johnson's strengths, weaknesses and future in the NFL:

Herman Johnson was a good player for LSU, but weight is not his only issue. He does not have great feet, though it is possible that if he kept his weight under control his feet would improve. I don't know much about the Cardinals or how they play, but I think his strength would be a big asset if he's put in a position where he does not have to do a lot of zone blocking. He's pretty good at point-of-attack run blocking, because he's so much bigger and stronger than anyone you usually see at the guard position.

One of the reasons he slipped is because NFL teams are wary of putting someone so big on the interior of the line. I guess his size could disrupt passing lanes. We never seemed to have any trouble with that, as we had effective passing games every year he was with us except for his senior year, which was certainly not his fault.

Mainly, I think what Herman Johnson needs to do is keep up his desire. He's a guy who if he's not motivated could get really out of shape. He showed up out of shape at LSU this year, which I actually think was a problem for many players on the team, as we had won the national championship the year before, and I think players thought it would be easy for us to keep winning. If he stays motivated and is put in the right position, I think he can be a fifth round steal. He's got the potential to be solid starter for a long time. I don't know if he's going to any pro bowls or anything, but I think he can be solid for you. Even if he doesn't develop as I would hope, I think his versatility would make him a valuable backup. I know enough to know that NFL teams only carry 7 or so offensive linemen, so their backups need to be able to play multiple positions. He's best-suited to guard, but he has played tackle. I doubt he can ever be quick enough to be a starting-caliber player at tackle, but he will be a nice emergency backup.

I was surprised that he lasted to the 5th, as I was surprised about all of LSU's players outside of Tyson Jackson and Curtis Taylor (surprised TJ went so high and surprised CT went at all) and how low they went. The day Curtis Taylor is a better football player than Darry Beckwith is a day I think black is white and dogs and cats live together in harmony.

Herman Johnson is certainly an intriguing prospect and we'll see if he can live up to the fifth round stature that Breaston and Hightower have established. What do you guys think about Johnson's future? Where will he end up playing?