Darnell Dockett Has Asked the Arizona Cardinals to Trade Him

Share All sharing options for: Darnell Dockett Has Asked the Arizona Cardinals to Trade Him

Hat tip to hevchv for breaking the story here at ROTB. 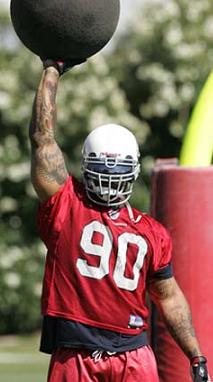 desire to be traded from the Arizona Cardinals. Dockett, through his snake in the grass agent, has asked the Cardinals for a trade, which of course they promptly denied. The team has known about Dockett's displeasure for over a year but they've also made it clear that he's not even in line yet for an extension. His current deal runs through the 2011 season and he agreed to that deal in 2006, but the extension started in the 2007 season.

Dockett enjoyed a breakout season in 2007, his first year under his new $22 million dollar extension, recording career highs in tackles and sacks. He was also named as a Pro Bowl alternate and despite receiving about seven million dollars in bonuses at the beginning of his contract, he felt he'd outperformed his contract less than a year after the ink was dry. Dockett's numbers came much closer to his career averages in 2008, but that hasn't stopped the soon to be 28 year old defensive lineman from requesting a trade. He still has three years left on his deal and absolutely zero leverage so I wouldn't expect the Cardinals to pay him any attention.

No one is expecting the Cardinals to listen to Dockett right now considering all of their other contract issues, but should they? Can Dockett cause enough of a problem in the locker room to force a trade? Is he really worth a new contract or does 2007 look like an aberration?