Former Arizona Cardinals First Round Pick Wendall Bryant Is Back in the NFL?

Share All sharing options for: Former Arizona Cardinals First Round Pick Wendall Bryant Is Back in the NFL?

Wendell Bryant, one of the biggest draft busts in Arizona Cardinals history, might be returning to the NFL. He recently had a tryout with the Buffalo Bills and he's stated that he's simply looking for a chance. According to his agent, they have not received a contract offer but his workout went "very well" and supposedly the Bills were impressed (but again that's according to his agent).

Bryant's NFL career currently consists of three disappointing years that began with being selected 12th overall and ended with a year long suspension. During those three seasons he amassed a total of 1.5 sacks and 28 tackles while progressively getting worse each year. Bryant admits that drugs and alcohol ran his life until early 2008 and he's been in a drug rehabilitation program since June of 2008.

Now that's clean and again has the desire to play football, the 28 year old said he's willing to play anywhere (NFL, CFL, UFL) to get back into the game. In a recent interview from he simply stated: 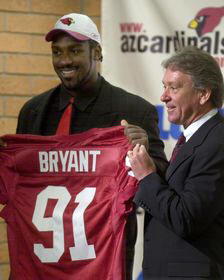 know what I'm doing to keep myself clean and that I can definitely be trusted," Bryant said during a recent telephone interview from his home in the Phoenix area. "I know it's scary territory for a team to delve into and they worry about, ‘What if this guy relapses or he takes a drink again?' The main thing I would want to let them know is I haven't had any drinks or done anything involving drugs in a long time....I don't plan on ever going back to that. I'm not about running around or any kind of mess like that. For me, it's all about being a father, getting married and holding it down and doing the right things. If anybody gives me a chance and lets me get that foot in the door, they won't be sorry. I'm a new man, and it feels great to be able to say that."

To his credit, Bryant sounds like a different guy and he doesn't blame anyone but himself. He's even stated a desire to talk at the rookie symposium share his story and warn other young players of the pitfalls of drugs and alcohol. He's still currently involved in litigation with the Cardinals who are going after some of his bonus money ($7.5 million) and Bryant seems willing to agree to some kind of repayment plan:

"I'm not going to have to file bankruptcy, but I am going to have to start a payment plan," Bryant said. "I want to pay the Cardinals back the money because I didn't give them what they deserved and they allowed me to live a great lifestyle. A man has to face his mistakes."

Bryant is currenlty down about ten pounds from his previous playing weight of 305 and admitted that's he rusty. He's still sure that's he's got some talent though and is just looking for a chance to prove himself. Thoughts? Would you root for him still if he makes it into the league?