Revenge of the Birds Chats With FSN Arizona's Jody Jackson

Share All sharing options for: Revenge of the Birds Chats With FSN Arizona's Jody Jackson

With the draft getting smaller and smaller in the rear view mirror, the Arizona Cardinals turn their focus to the future and ROTB will try to analyze the roster, draft and future from every possible angle. Part of that strategy will include landing big interviews with those who know the team best, like Jody Jackson of Fox Sports Arizona. Jackson, who covers the team on two different FSN shows, has some unique insights after nearly a decade of covering the Red Birds:

RTOB - Since we've got some ROTB readers who might not be familiar with your fine work, can you tell us a little about yourself, how you came cover the Cardinals and what is your current involvement with the team? Also where can fans catch your show?

Jody Jackson - I am a die-hard football fan originally from the Miami-Ft. Lauderdale area. I am a Miami Hurricane (1995 grad) and after working in sports radio in Miami, I spent 2 years at the CBS affiliate in Buffalo, NY covering the Bills and Sabres. In 2000, I moved to the desert covering all the sports teams here in Arizona. My love for football drew me close to the Cardinals and I began hosting their show, "Maximum Cardinals" as well as doing sideline reports on the preseason games. I also host "Cardinals Live" here at Fox Sports Arizona Sunday nights during football season. Glenn Parker has done a fantastic job providing analysis for this show, as well as Paul Calvisi serving as our fine reporter in the locker room!

ROTB - Now that we're closely acquainted and expectations are flying high in the desert, how far has this team and franchise come since you first started covering them? What has been the biggest cause for change in your mind?

JJ - The obvious change is the stadium and the way the fan base has made game days special here in AZ. But the building was just the start. The Bidwills made the move to hire Ken Whisenhunt, and he has proven himself in 2 short years. Let's face it; he's done something we never expected in taking the Cards to the Super Bowl. His plan, his coaching staff, and his coaching expertise have made the difference. Rod Graves and Steve Keim have done a great job as well when it comes to identifying talent and "building the core".

ROTB - Most fans, and almost all of us here at ROTB, stand behind everything that Ken Whisenhunt does and view him as one of the best moves that this franchise has ever made. You've seen a couple of different coaches roll through here, so what sets Whiz apart from previous head coaches or did he just get here at the right time? 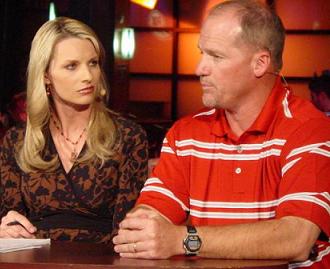 JJ - He did inherit some great players drafted by Dennis Green, and Kurt Warner was here as well. But it's all about making the right decisions. Whiz called the plays in the first year, and subsequently found out a lot about his 2 quarterbacks. When the running game didn't work in 2007, he let Warner sling the ball. He adjusted to his team's strengths. Then in training camp he made the call to go with Warner in '08. Seems like a no-brainer now, right? Think about the possible distractions in an unhappy Q and Edge all of last season. And yet they went to the last game and were 2 minutes and 37 seconds away from winning it all. He is very cerebral and doesn't let his emotions take over in his decision making. I believe that is what has made the difference.

ROTB - The Cardinals entered the off season with loads of cap room, more than a handful of free agents and several players who weren't exactly pleased with their current contracts. Some players were retained, some were let go and the some players are still unhappy, but overall one could argue that the Cardinals look to be more talented right now than they were this time last year. How do you view the Cardinals off season moves so far? Best move/Worst Move?

JJ - As much as I hate to see a great guy and a hard worker like Rod Hood go, I think signing Bryant McFadden is a terrific move. Steeler imports have worked well so far..... Curious how Beanie Wells will fit in, but I think he has the potential to be a bruising back.

Worst moves could be in the defensive front seven. We will all be okay with Antonio Smith getting his cash in Houston if Calais Campbell and Kenny Iwebema can do the job. Last year in limited action they played well. Antonio had a great playoff run with a safety in the Atlanta game and then stripping Jake Delhomme early in the Carolina game to swing the momentum. Campbell could become that type of player-remember it took Antonio a few years to develop. We'll see how the linebackers shake out under new DC Billy Davis. The draft picks, Cody Brown and Will Davis may take a little while to contribute.

ROTB - The Cardinals enter the season with high, yet actually realistic, hopes of repeating as NFC West Champs and a return trip to the playoffs, but that doesn't mean that they are without question marks. What area of this team is the most concerning to you and is a weakness that they can overcome?

JJ - I think it will be interesting to see if they are able to be more balanced on offense. We all know a more consistent running game will help keep Warner healthy back there. They don't have to run a lot, just be successful when they have to and keep defenders at bay. Tight end is still a question mark, but Anthony Becht is a good blocker and a very durable player. I think that on defense they could actually be a better unit with Billy Davis as DC, but again, there are personnel moves and we will have to see how they come together.

ROTB - For the last question I'll throw out an easy one......Predictions for the '09 season?

JJ - The schedule sets up really well for them-on paper. We all know paper doesn't tell us much in the NFL! No cold weather games, except for Tennessee perhaps. Maybe Chicago if winter comes in the first week of November. Beginning at home and ending with 2 home games is comfortable as well. No nightmarish Thanksgiving games on the East coast after playing just 5 days earlier. That said, it all comes down to winning the division, and I think they will do that again. I am too smart to go and try to predict playoff victories, but just for fun and because I'd love to go back to my home state of FLA, I'll say Cards vs. the odds makers favorite- the Patriots (although I wouldn't count out the Steelers). I know, you are rolling your eyes. Hey a girl can dream, right???

Many, many thanks to Jody for taking the time to answer some questions. Don't forget to surf the TV Guide for her shows, Maximum Cardinals and Cardinals Live, where you'll not only hear great analysis but also regular interviews with players and coaches. Thoughts?