This time last year, one of the biggest position battles for the Arizona Cardinals heading into training camp was supposed to be the third receiver slot. Most fans, myself included, thought that the slot receiver role would be filled by last year's third 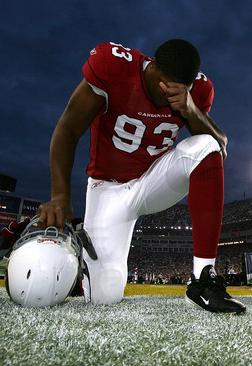 round pick Early Doucet. He was not only a talented receiver who most thought had first or second round talent but his competition seemed pretty weak, after all the only guy with any professional experience was Jerheme Urban who's career consisted of 35 receptions over five seasons. Of course we all know now how foolish that thought process was at the time. Steve Breaston easily won the job, cemented himself as one of the most dynamic receivers out of the slot and recorded his first 1,000 yard season despite having less than 100 yards his entire rookie season. By the end of the season he not only dominated the voting in ROTB's Most Improved Player of the Year award but he even garnered some attention in the ROTB's MVP voting.

It goes without saying that no one expected Breaston to have such an amazing season in 2008, but that's nature of the NFL. It seems like every year there is a player who rises from relative obscurity or mediocrity to enjoy a breakout season. In 2007, Darnell Dockett not only set new career highs in tackles and sacks but his sack total (9) nearly tripled his previous career high. Calvin Pace also deserved some consideration in 2007. Gerald Hayes made a name for himself in 2006 by posting 93 tackles, three picks and his first career sack in his first season as a starter. With that in mind, the Cardinals have a handful of guys who could enjoy breakout seasons, but who will take home the ROTB's Most Improved Player next off season?

Today we take a look at our first candidate, Calais Campbell and he'll be our first name on the ROTB M.I.P watch list.

Campbell spent his rookie season playing mostly on special teams while backing up Antonio Smith and Darnell Dockett.  With Smith flying the coup to Houston via free agency, Campbell enters training camp as the starter at left defensive end. Campbell proved that he had the athleticism last year by starring on coverage units and now he'll have to take the next step by becoming a reliable starter on a defense that's expecting to be much improved. Smith averaged 42 tackles and 4.5 sacks over his two seasons as a starter and Campbell has the physical tools to produce similar results. He'll also have the advantage of not being the focal point on an offense. With Darnell Dockett at right defensive end and both outside linebackers, Campbell shouldn't have to worry about facing double teams on a consistent basis.

Run Defense: There's hardly any doubt that teams will try to test Campbell by running the ball directly at him. Two of the biggest flaws in his game coming out of Miami were that his strength was questioned and that he had a tendency to get too high, causing him to lose the leverage battle. Strength and conditioning coach John Lott normally cures alot of the strength issues with young Cardinals players but Campbell's height (6'8) will always be something that could work against him in the running game. He'll have to be diligent about keeping his pad level low in order to hold the point of attack in the the running game.

Pass Rush: Campbell's calling card in college was his ability to turn the corner and get to the QB. He recorded 16.5 sacks during his sophomore and junior season and his length is something that many offensive tackles simply can't counter. He'll certainly knock down some passes and, in the past, has used his long arms to swat the ball out of the quarterbacks' hands. A solid pass rushers from the 3-4 defensive end spot is a rare sight and Campbell pairing with Dockett, as well as the outside linebackers, should ensure that an offensive line can't double anyone. One of the things that Campbell will have to watch early in the season is opposing lineman trying to cut his legs out from under him. His height makes him prone to cut blocks and once he bats a couple of balls down at the line, he'll probably start to see more and more teams go that route.

Campbell still might slide down inside on passing downs, as he did at times last year, but he should spend most of his time on the outside which best suits his skill set. What are you expecting from Campbell during his sophomore season? Can he match Smith's production?