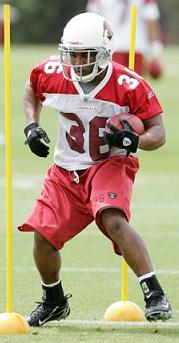 The Arizona Cardinals have signed seventh round pick, LaRod Stephens-Howling to a three year contract, although financial terms were not released. It's almost certainly a very basic contract for close to the minimum each season ( something around $305,000, $385,000 and $460,000) with a small signing bonus, which is the case with almost every late round draft pick.

Despite not being invited to the combine or being a starter for his final two years at the University of Pittsburgh, Stephens-Howling made an impression on the Cardinals coaching staff at Pitt's pro day and he was the 240th overall selection. LSH figures to be in the mix for the third down back role although his biggest battle and best chance to find a roster spot this season will be as a kick returner. His size (5'7 180) will always raise question marks but his burst and shiftiness has drawn several comparisons to the Chargers' Darren Sproles. He's also gotten rave reviews from the Cardinals front office and coaching staff, as well as Pitt's coaching staff, for his work ethic and dedication to the game. Here's what his former running backs coach, David Walker, had to say about LSH:

"He does all the little things the right way......He is a model student-athlete and an excellent example for every player on our team."

This marks the second draft pick that the Cardinals have signed with fifth round pick Herman Johnson being the first.