We're still plowing through our weekly installments of position by position breakdowns of the NFC West (check out previous stories here) and today we start looking at the big uglies, specifically the only player who touches the ball more than the quarterback. Yes the big men in the center of every offensive line get little fanfare but today we put them in the spotlight. Lyle Sendlien headlines the center of the 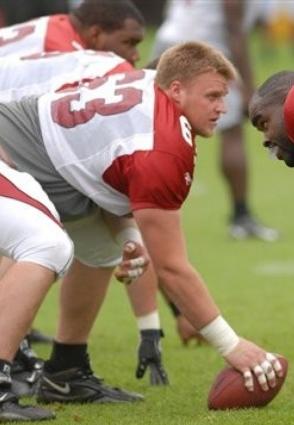 Arizona Cardinals offensive line but how does the rest of the division stand and how would the teams rank?

The Cardinals opened training camp last year with what most assumed to be a decent veteran starter at center and the 'center of the future' as his primary backup. Unfortunately, or fortunately depending on how you look at it, the veteran starting center, Al Johnson, never recovered from off season surgery and was placed on IR in early September. That move pushed young Lyle Sendlein, an undrafted second year player, into the starting lineup and left virtually no one to back him up. Luckily for the Cardinals, Sendlein stayed healthy, at least enough to play, all season long although most would say that his play was average at best. As with most undersized centers, Sendlein excelled at getting to the next level and picking up linebackers but he struggled with facing larger nose tackles either in the running game or passing game. Of course we know now that he played most of the season with a bum shoulder that required surgery in the off season but questions still remained about his future as a starter.

Head coach Ken Whisenhunt gave Sendlein a vote of confidence shortly before the draft, saying that he had the potential to be a great center in the league, and he backed it up by not addressing the position in the draft until late in the seventh round. Sendlein enters this season as the unquestioned starter and with a surgically repaired shoulder and more strength than he's had in years, there are hopes that he'll take the next step in his third season.

The depth behind Sendlein is still shaky, at best. There are three other 'true centers' on the current roster (Ben Claxton, Donovan Raiola and Patt Ross) and their respective careers have consisted of two games during the 2005 season. Trevor Canfield, the 254th overall selection this April is capable of playing guard and he's got a chance to be the primary backup if he performs well in camp. There's a good possibility though that if Sendlein were to go down for any length of time the interior of the line would get shuffled around with right guard, Reggie Wells, sliding over to center and someone stepping into his guard spot. Basically, the Cardinals need to have Sendlein healthy if they want anything close to average performance from the center position. Overall grade: C

Center is a tough position to grade when it comes to the 49ers. They've got a very solid guy starting in Eric Heitmann (underrated in the league), but their depth is questionable at best.

Heitmann is still on the right side of 30 and quietly has been a very impressive center for the 49ers. Last season, Mike Martz actually referred to Heitmann as the best center he's ever coached by far. That can certainly be taken with a grain of salt, but it goes to show what some folks think of him. While the team is developing young talent around him, Heitmann has been the anchor of the line. Heitmann had fallen off the radar a bit due to a broken leg late in 2006. He struggled in 2007 while recovering, but seemed to be completely recovered in 2008. While he's not the most athletic of centers, he is able to stand his ground and anchor the line.

Behind Heitmann, question marks abound. Cody Wallace is listed as the backup center but it's hard to tell if he'll amount to anything in the coming years. He's entering his second year in the league and saw no playing time his rookies season so it's hard to tell what he can provide the 49ers. As a 4th round pick, there's just not a whole lot to work with looking ahead. The 49ers signed Heitmann to an extension through 2011 and if he stays healthy, Wallace might never see more than some backup time. This preseason could be big for determining Wallace's future role.

Although not listed as a center on most depth charts at this point, guard Tony Wragge filled in for Heitmann back in late 2006 after Heitmann broke his leg. If Heitmann went down again, Wallace might get a crack at the lineup, but it wouldn't exactly surprise me to see Wragge moved back over to center. Wragge is not great by any means, but he's a serviceable backup.

Given the lack of backup options, I'm probably grading this a little high, but I am really this happy with Eric Heitmann as the 49ers center this year. Grade: B

The Rams have struggled to find a center since age caught up to Andy McCollum during the 2006 season, and the team parted ways with the then-37-year-old center after an injury riddled 2007 campaign. Heading into 2008, Mark Setterstrom looked like an odds on favorite for the job, but injuries got to him early in camp. The undersized, overmatched duo of Nick Leckey and Brett Romberg started at center for the Rams last season, making the middle of the offensive line by far the weakest link on an already troubled offense. Half of the numerous sacks endured by Rams passers last year came through the middle, which is to say nothing about how much the run game suffered.

Under new management and coaches, the Rams made a huge splash in the free agent market, signing Ravens C Jason Brown, the most coveted offensive lineman to reach free agency this year, to a lucrative five-year, $37 million deal. Whether or not they paid too much is beside the point. The Rams desperately needed to do something at center or risk losing the investments they've made in Steven Jackson and Marc Bulger. Brown, just 26, will be a cornerstone of an up and coming offensive line that could be the best in the division, if not this year, then very soon. Not bad for a unit that was the team's biggest liability just a few months ago.

Depth is a concern, but the Rams have a good situation in regards to their middle linemen. Should Brown not be available, they can plug in the capable Mark Setterstrom, who they would have killed to have at center last year. They also have the option of sliding RG Richie Incognito over to center and replacing him with either Setterstrom or John Greco (more on those names in the guard write-up) and be just fine in the middle. Grade: A

Seattle selected Chris Spencer with the 26th overall pick in the 2005 draft. He was just the thirteenth center selected in the first round since the merger. Spencer was a great athlete and considered a safe pick. Fans envisioned a future star. Upon further inspection, that was an unreasonable expectation. Of the sixteen centers since 1970 selected in the first round, only three were ever elected to a Pro Bowl and only one was elected to multiple Pro Bowls: Don Mosebar.

Instead, investing in a first round center is investing in a starting center. Only one of the thirteen was a true bust, Robert Shaw, and Shaw blew out his knee and was forced into retirement. That's what Chris Spencer is, a starting center. He started 29 games in 2006 and 2007 after apprenticing under Robbie Tobeck, and was shut down in 2008 only after the season was lost. He's a steady center that shows flashes of great athleticism and physical dominance, but hasn't developed into a consistent or technically sound blocker. His footwork is unrefined, though he's improved enough to not trip over himself. Spencer is derided for a few reasons. Mike Holmgren was critical of his play. He reportedly was slow to pick up line calls. He is wont to the big gaffe. Finally, he's not Robbie Tobeck, and the memory of Tobeck has grown well beyond the man. Spencer is physically gifted. He's a former record setting power-lifter and rare- quick and agile for a center. So there's still chance of breakout in a big way.

Max Unger is not the opposite of Chris Spencer; he's more like the negative. Unger is not nearly as powerful and might struggle against stronger nose tackles. He's not unrefined and full of potential, but skilled and NFL-ready. He's a good athlete, but a better offensive lineman. Unger could overtake Spencer or settle in at guard. He's a natural center and has expressed his desire to play the position.

Between the two, the polished rookie and the veteran full of potential, Seattle should have an above average starting center and the best center depth in the NFL. The grade is tilted towards the starter, but accounting for Spencer's potential, Unger's potential, Spencer's standing level of play, Unger's polish and Seattle's depth at the position, this is a solid B with a chance to be better.

For the record, I think these ranking might look very different next year if Sendlien is healthy and his strength has improved as much as they're implying right now. He might very well be the key to the Cardinals offensive line being borderline average again this season or being well above average. Thoughts? How would you rank the division?