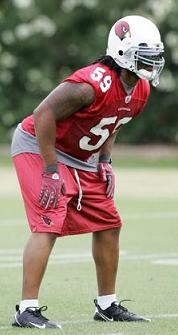 The Arizona Cardinals signed their sixth round draft pick today with Will Davis agreeing to a three year deal. As usual with the Cardinals, financial terms were not disclosed but you can almost guarantee that it's three years at the minimum each year with a small signing bonus the yearly basis are all for the league minimums and his signing bonus was $66,000. Davis, an University of Illinois product, is expected to compete at outside linebacker after playing defensive end in college.

Davis arrived at Illinois as a wide receiver but quickly moved from tight end to defensive end and that's where he played for most of his time at Illinois. He had a breakout junior season in which he totaled 9 1/2 sacks but injuries along the defensive line forced him inside to tackle as a senior and he struggled, recording just 3 1/2 sacks. In total, Davis recorded 15 sacks during his college career but he'll be asked to learn yet another position with the Cardinals. We talked to the head writer at Hail to the Orange (SBNation's Illinois site) about Davis' abilities and he was impressed by Davis' ability to get to the quarterback:

Will Davis was probably the best pure pass rusher on the team last year and the year before.......In pure passing situations his quickness and instincts will result in him getting to the QB more often than not, but he's in trouble when teams run at him.

The Cardinals also released punter Waylon Prather, leaving veteran Ben Graham as the only punter on the team, in order to make room for Davis. Previous rookies who have signed include Trevor Canfield, LaRod Stephens-Howling, Herman Johnson.