We've looked at the Arizona Cardinals safeties, corner backs and inside linebackers, but today we move to the 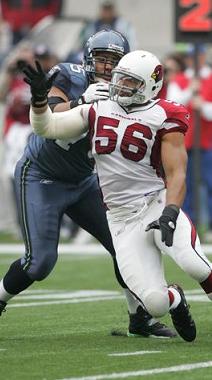 outside linebackers. There might not be a more important position for a 3-4 defense than the outside linebackers because of their impact on all phases of the defense. Not only are they the primary pass rushers but they're also expected to hold "the edge" in the running game as well as drop back into pass coverage from time to time. The Cardinals are fortunate to have two projected starters who've combined for 82 sacks in their respective careers; the duo of Clark Haggans and Chike Okeafor aren't exactly spring chickens though. Injuries will be a concern for this group considering that Haggans, Okeafor and Berry have each missed significant portions of recent years with season ending injuries. As we mentioned with the inside linebackers, the depth at backer will likely play (or at least know) all four positions but to project the rotation would require we wade through murky waters until preseason.

This might be one of the easiest positions on the roster to break down simply because there isn't much depth to dig through. If you consider Berry just a situational pass rusher who will line up with his hand on the ground, Davis might even slip into the lock category unless the trio of Ali Highsmith, Victor Hobson and Pago Togafau prove that they are able to handle the backup duties themselves.

Will Davis: Davis, this year's sixth round pick, is an promising defender with above average athleticism but the transition from defensive end to outside linebacker isn't an easy task. He'll have to re-familiarize himself with playing in space after spending his senior season at defensive tackle but most feel that with time he'll be able to play the position. The depth ahead of him is his biggest obstacle but the health of 30-somethings, Okeafor, Haggans and Berry (all of whom have ended seasons on the Injured Reserve in the past two years) could force him into playing time sooner than most expect.

The only real question seems to be would you risk cutting Davis and putting him on the practice squad? Most would consider that a relatively safe gamble considering his draft pick status but we'll have to see if he turns any heads in the preseason. Would you hold onto Davis or do you feel safe with him on the practice squad? Are you comfortable with the depth at OLB?