Does Greg Jennings New Contract Have Any Effect on Anquan Boldin?

Share All sharing options for: Does Greg Jennings New Contract Have Any Effect on Anquan Boldin?

Perhaps it's the world we live in that we have to keep one eye on our own and one eye on everyone else, but the first thing I thought of when I heard that Greg Jennings got the new contract that he's been lobbying for is, will it effect 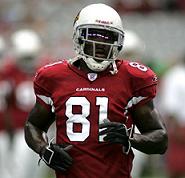 Anquan Boldin? In case you missed it, Jennings' contract is a four year deal worth $27.535 million with $15 million guaranteed with an additional three million avaliable via incentives. That averages to almost seven million season at the original amount or just over seven and a half million if he reaches his incentives. Jennings was entering the final year of his rookie contract and was scheduled to make $535,000.

Jennings, of course, isn't on the same level as Boldin but his contract is still pretty significant considering that he could make as much as $7.6 million per season. It's possible that Boldin could see that number and consider it the baseline for his demands. Boldin's first three years on the league were much more productive than Jennings and their overall numbers really aren't comparable outside of touchdowns. All of that points to the idea that Boldin wouldn't accept a contract for similar dollars.

If you were Boldin would you accept a similar deal or would this deal push your demands very close to or over eight million per season?