Gregory Toler and his Future with the Arizona Cardinals

Share All sharing options for: Gregory Toler and his Future with the Arizona Cardinals

We said it about a million times this off season but the Arizona Cardinals struggled to stop the opposition's passing game throughout the 2008 season and they've spent most of the off season trying to shore up and rebuild the secondary. Since that fateful game on the first day of February, the Cards have signed a big name free agent corner back (Bryant 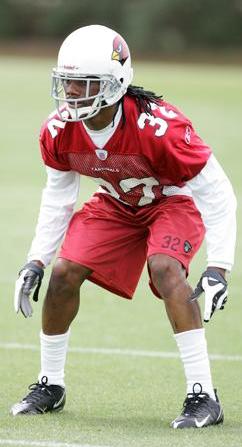 McFadden), released or didn't re-sign both of their opening day starters from one year ago (Rod Hood and Eric Green) and used two of their first four picks in April's draft on youngsters to add depth. The first of these two picks, Rashad Johnson, is an ball hawking safety from one of the biggest NFL football factories in the NCAA, but the Redbirds next selection was a player of a much lower profile.

Gregory Toler, a tall lanky corner back, is the first player to ever be drafted out of Saint Paul's College, a tiny D-II school tucked away in the Blue Ridge Mountains of southern Virginia. After poor grades in high school prevented him from a being recruited by any major colleges, Toler chose the Kurt Warner path the NFL, stocking shelves and sweeping the aisles at a local JC Penney. Toler eventually got back into the game via a small semi-pro league and caught the eye of St. Paul's defensive coordinator, Kevin Grisby. Grisby became a father figure to Toler, helping him with his grades as well as football, and Toler quickly became a stand out player. He'd go on to start 40 games at St. Paul's and set school records with 14 interceptions, 36 pass breakups and 50 passes defended. He'd receive All-CIAA first team honors twice and received All-American honors following his senior season. Despite a banner collegiate career, Toler wasn't invited to the combine and didn't generate a ton of interest leading up to the draft. That didn't stop the Cardinals from calling his name in the fourth round though with the 131st overall selection. Almost immediately after the Cardinals called Toler's name the comparisons to Dominique Rodgers-Cromartie started. The physical similarities seems valid considering that both have good size and outstanding athleticism. Toler's listed as 5'11, 191 (vs. 6'2, 182 for DRC) and he reportedly ran his forty in the high 4.3's (vs. 4.3 for DRC), but what can we expect from Toler this season and in the future?

What to expect early on: Despite Toler's physical gifts, it's probably a mistake to expect anything more than quality special teams play early in his career. He's extremely raw and much like DRC, he'll have to get bigger and stronger before he's ready to match up against NFL receivers. One of Toler's biggest weaknesses at this point is his ability to diagnose plays, especially when in zone coverage, and that's an ability that will take time to learn. He's also got a habit of staring into the backfield, which at times can lead to interceptions or big plays for an opposing offense. Overall I'm reminded of what we said about DRC last year:

Rodgers-Cromartie most likely won't win any rookie of the year awards or lead the league in interceptions in 2008, but he got the athletic ability and mental make-up to be a top flight corner for years to come. If I had to make a projection right now, I'd guess that he'll have some moments where he looks like he doesn't belong in the league early in the season, but by the end of the year he'll likely pick up a handful of starts and show some significant signs of becoming a top tier cornerback.

The difference with Toler though is that it may take him a full year or even two to develop into an NFL quality cornerback. Toler's ceiling isn't expected to be as high as DRC's but luckily the Cardinals aren't expecting or really needing him to step into the starting line-up or even the nickel corner spot this season. The starting cornerbacks are set and with Antrel Rolle and Ralph Brown, Toler should be able to focus this season on special teams contributions and improving his craft during practice. 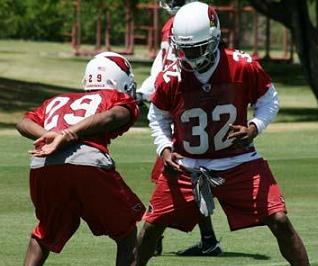 With Brown on a one year deal, McFadden on a two year deal and Rolle's contract status somewhat up in the air, Toler's development could be the key to the future of the Cardinals secondary. That alone might be enough to keep the staff from rushing him along, but time will tell how his future plays out. For now, he's not intimated about facing the best group of wide receivers in the league during practice:

"It's still football, pigskin ball, played on green grass, same as it's been since I was six," he said. "I'm sure they'll get me a few times, but I'll learn as much as I can from them. Playing against them every day won't do anything but help me on Sunday."

Toler's future certainly seems bright considering his constant comparisons to DRC and he's already turned some heads during OTA's, including Antrel Rolle's. What do you expect from Toler in 2009 and for the years to come? Is he a future starter or just a great athlete?