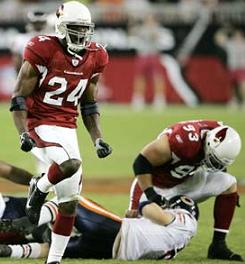 The Arizona Cardinals front office continues to take care of business as they've signed Adrian Wilson, the veteran leader of the defense, to a new five year contract. Wilson was entering the final year of his deal and would have been a free agent after this season. Wilson, a third round pick in 2001, is one of the longest tenured Cardinals on the roster and will soon be a member of the exclusive 20/20 club (20 sacks/20 picks). Financial terms were not disclosed but a press conference has been scheduled for 3:30 today.

The new deal will keep Wilson, a two time Pro Bowler, in a Cardinals' uniform throught the 2013 season.  Big, major, gigantous props go out to the front office (Rod Graves and Michael Bidwell) for rewarding one of the franchise's best player and props to Wilson for handling his contract situation the right way. This clears the first, of three, major hurdles that the front office hopes to get resolved this off season. Karlos Dansby's future is still very much in doubt and we all know the situation with Anquan Boldin. We'll update as more information is avaliable.

Update: The deal is worth $39 million, with $18.5 million guaranteed and it'll carry a monster cap hit of roughly $10 million this season. The deal has been described by some sources as a 'four year extension' as opposed to a 'five year deal' but the bottom line is that it puts Wilson among the highest paid safeties in the league.