Are the Baltimore Ravens Back in the Running for Anquan Boldin?

Share All sharing options for: Are the Baltimore Ravens Back in the Running for Anquan Boldin? 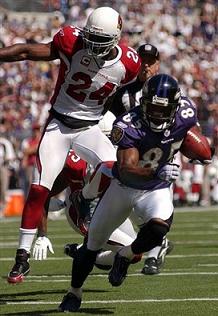 I know that we are all burnt out on Anquan Boldin trade talks but with the news of Derrick Mason 's retirement, there is some speculation (here, here and here)  that the Baltimore Ravens are in dire need of a top flight wide receiver. As you might expect, any talk of 'top flight receivers' at this point will include Boldin, Brandon Marshall and Braylon Edwards. The problem with any of speculation is that the Ravens already inquired about Boldin before the draft and they weren't willing to meet, or even approach, the Arizona Cardinals demands so what has changed?

Well for starters the Ravens might be desperate now. Without Mason leading their receiving corps, the Ravens face the possibility of starting a season with two receivers (Mark Clayton and Demetrius Williams) who, in seven combined seasons, have zero 1,000 yard seasons and 13 total TDs. So is Anquan Boldin a realistic target for the Ravens?

The level of the Ravens desperation is the key here. How much are they willing to give up in order to give their young QB a reliable target? They weren't ready trade a first and third rounder for Boldin when Mason was in the fold but that might have changed now. But would the Cardinals essentially trade the present for the future?

The Red Birds are in a 'win now' mode with Kurt Warner at the helm and trading a receiver like Boldin for picks that will help the 2010 team wouldn't seem to make sense, but we can't see the entire picture. For instance, we don't have any idea how much confidence the coaching staff has in guys like Jerheme Urban or Early Doucet and their ability to become much larger contributors. With five picks in the first 100 next April (assuming a first and third round pick in a trade), the Cardinals would be able to infuse this roster with quite a bit of young talent and would allow them to be quite flexible in terms of trades.

In the end, we all know that trading Boldin before the season is a long shot, at best, if not compeletely out of the question. Boldin is a valuable member of this team both on the field and in the locker room, but as the saying goes "everything is for sale at the right price." With a team like the Ravens who are also trying win right now, I wouldn't be surprised if Rod Graves phone was already ringing. First, would you trade Boldin right now for any price? Would you're asking price be higher considering that the picks won't help this team? And finally, how tired are you of Boldin trade talks?