While the NFL draft is a huge weekend in April that receives more buildup and publicity than Paris Hilton's birthday party, the red headed step child of the draft process is the yearly Supplemental Draft. It rarely get's much, if any, publicity and it'll take some serious googling to find any significant information on the S-draft or the players who are involved. For some quick facts about the S-draft, only 38 players have been selected in the 31 years that it's been in place and a team can select as many as seven players or not select a player at all. The Arizona Cardinals have only selected two players, Timm Rosenbach (1989) and Willie Williams (1990), although neither player really made an impact. Interest in the draft has wained over time considering that 23 players were selected from 1977 to 1990 but just 14 players have been selected since 1990. Last year there wasn't even a player who declared for the draft. Some big name players have come from this process including Bernie Kosar, Brian Bosworth, Chris Carter, Rob Moore, Jamal Williams and Jared Gaither (Raven's starting LT).

For those were aren't familiar with the process, it's much different the normal NFL draft and you won't even find coverage on it via your television. First the 'draft' is held tomorrow and it's basically a silent auction format in which teams submit bids (ala the round that they wish to select a prospect) and the winning bid gets the player and the subsequent pick in forfeited in the following April draft. For example if the Cardinals selected a prospect tommorrow with a fourth round pick, they'd lose their fourth round pick for the April 2010 draft, but there is no loss for submitting a non-winning bid. Normally the players in the draft are guys who have lost their eligibility for one reason or another. It's most often academic related but it can also include failing drug tests or getting booted from their college teams for any number of reasons. There are a handful of prospects who have entered the draft this year and there is at least one player who is thought of as a 'lock' to be selected. Here's a quick look at each, although for the record the Cardinals haven't shown much interest in any of these guys: 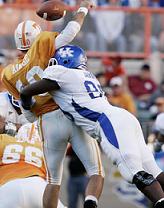 Jeremy Jarmon (DE, Kentucky): Jarmon, a former All-SEC defensive lineman, has great size (6-3, 278) and was thought of as one of the nation's top senior defensive ends entering the year. But after he tested positive for a banned substance, the NCAA ruled him ineligible for 2009, thus leaving him with the only option of making the jump to the NFL. He recently had an impressive workout for scouts and representatives from 18 teams and could go as early as the third round. He ran his 40 in a time of 4.78 seconds, posted 19 reps on the bench and reached 31 inches on his vertical jump. More importantly, he was said to be in good shape, looked smooth during position drills and interviewed well with NFL teams.

Deon Murphy (WR, Kansas State): Murphy, a former Big 12 Newcomer of the Year, is a small receiver (5-10, 170) whose value is tied to his ability as a returner. Murphy is described as one of the "cleaner prospects" in this group because he left Kansas State because of a personality conflict with head coach Bill Snyder, as opposed to a team or NCAA suspension. As a returner, Murphy was third in the nation with 17.5 yards per return, but as a receiver he's struggled with drops and press coverage. As a pro he's projected mainly as a returner although he could make an impact in the slot where he can't be pressed. 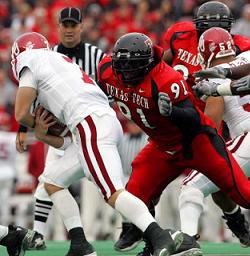 McKinner Dixon (DE, Texas Tech): Dixon is the first real 'problem child' of this group. On the good side, he has obvious talent considering that he's racked up 15 sacks in his two seasons at Texas Tech despite never really being a starter. The bad news though is that Dixon's been suspended (or flunked out) twice and been arrested once (for open container and driving without a liscence). In 2005 he played as a true freshman and had 29 tackles and five sacks but he'd miss the next two seasons after flunking out of Texas Tech. When he returned in 2008 he won the Big 12 Newcomer of the Year award (despite not really being a 'newcomer') with nine sacks and eleven tackles for loss. Dixon, (6-3, 250) has good burst off the snap and has flashed play making ability but he lacks the bulk and strength most 4-3 teams are looking for at defensive end. If you've been around ROTB for any length of time, you know that statement describes just about every 3-4 OLB prospect coming out of college. Most of the articles mentioning Dixon say that he might be worth a late round pick or at least a free agent look.

Demetrice Morley (DB, Tennessee): Morley was a huge recruit coming out of high school and he played in every single game as a freshman and sophmore, but academics, or a lack thereof, kept him from enrolling in 2007. After a season off that was highlighted by an arrest for robbery, he returned in 2008 and was the Volunteers starting free safety (42 tackles, two picks). He's characterized by scouts as instinctive and big enough (6-2, 195) to handle free safety but he also has the athleticism to handle a move to cornerback. Morley cleary has NFL talent but he was essentially kicked off the team by two different coaches and scouts are doubting whether an NFL team will take a gamble on him.

There are a couple of other guys in the mix tomorrow but these four are considered the most likely to be drafted. The other four include:

Joe McMahon (G/C): McMahon is a 6-4, 295 pound guard/center from Central Michigan and two-time Golden Gloves Champion, but was forced into the supplemental draft due to academic reasons.

Blake Boyd (OLB): Boyd played OLB in the 4-3 defense of the Hilltoppers and racked up 184 tackles and 16.5 tackles for a loss in his three seasons before being declared academically ineligible for the 2009 season.

Torris Magee (WR): Magee has good size but he put up marginal stats at a lower level of college football and has an arrest for burglary in his past.

That's a quick look at the guys who will be on the board tomorrow. Obviously we don't have a scouts view of these guys but would you take any of these guys with a late round pick or are the red flags to obvious?