Our pre-training camp roster projections lands on quite possibly the least glamorous position in the NFL today. Not 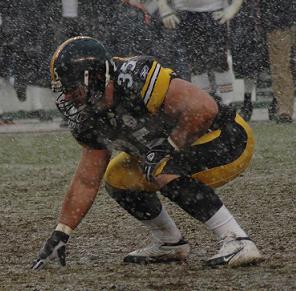 only do full backs get very little love or attention but their also a dying breed. There was a time when these 'guards wearing tail back numbers' who substituted huge shoulder for necks were celebrated, but today they are practically an endangered species. Today the league prefers three wide out sets as opposed to the power I and 'hybrid' fullbacks who can contribute on special teams but is there a place for the traditional 'fire hydrant' type of fullback on this Cardinals roster?

The Cardinals carried two fullbacks last year, one traditional (Terrelle Smith) and one hybrid (Tim Castille) but that's not the NFL norm. It'll be interesting to see if Whisenhunt and his staff chose to go with two fullbacks again or if they can settle on one fill multiple roles. For the record, no one is eligible for the practice squad.

Dan Kreider: If ever there was a player who could have "Whiz and Grimm guy" stamped on his forehead it would be Dan Kreider. He is quite simply a hand in the ground, mud on the jersey, old school full back. In ten NFL seasons he racked up a grand total of 32 carries and two touchdowns. He doesn't play special teams and he doesn't have the ball in his hands very often. When Kreider (5-11, 250) is in the game, he's there to act as a lead blocker and when he's healthy, he's awful good at it. 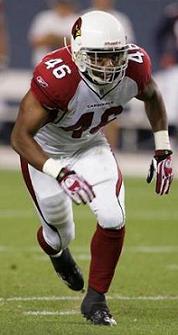 Tim Castille: Castille is the new wave of he NFL fullback. He can play special teams, he can catch the ball out of the backfield and he can carry the ball on occasion and he can even block a little, but up until this point he really hasn't been utilized by the Cards. Entering his third season, this could be the year that Castille (5-11, 238) grabs a hold of the fullback job and never looks back. If he's improved his blocking enough, he just might impress the coaching staff enough to reduce the fullback position to a single player.

Justin Green: Green is a bit of an unknown at this point considering that he was signed to a futures contract earlier in the off season which means that he didn't play in the league in 2008. We can't find any reports of him missing the season due to injuries although there are rumors that some sort of injury led to his release in Baltimore and his one day stint with the Jets. If there is such a thing as a 'tweener' fullback, then Green probably fits that role. He was a tail back in college but has spent his professional career as a full back and special team's player. He's described as an adequate blocker though so he's got a chance considering that he's only 27.

The full back spot looks like a virtual crap shoot and just about any combination, outside of retaining all three seem realistic. Maybe it's the same thought process as last year with Krieder replacing Smith or maybe Castille's time as a hybrid experiment is over and they keep just Kreider as a traditional blocking back. Then again maybe they decide that Green is the best of both worlds and he's the guy that sticks and even farther out there is the possibility that Dominique Byrd's experimentation with the H-back role works so well that they don't even keep a full back (even I'll admit that sounds pretty crazy for Whiz and Grimm). How do you think it'll play out?